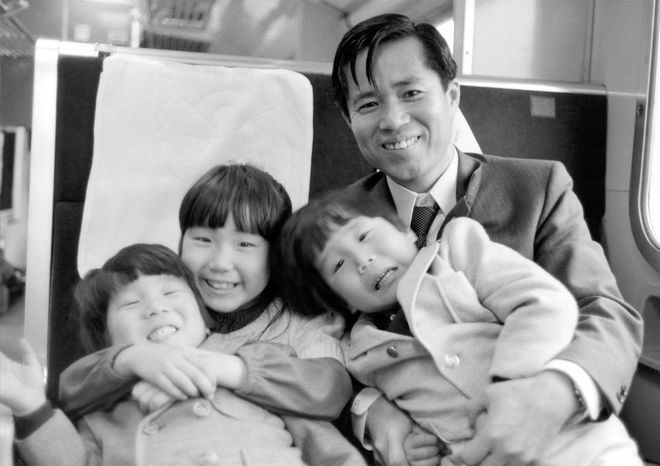 Shigeru Yokota with his daughter Megumi, second from left, and her brothers. The photo was taken around 1972 by Sakie Yokota during a family trip in Hiroshima prefecture. (Provided by Sakie Yokota)

When she was a little girl, Megumi Yokota got lost in a department store, and the store paged her parents on the PA system.

They came running to collect her. To their surprise and relief, Megumi was having a great time, loving the ribbon that a kind floor saleswoman had tied in her hair. And she said to her parents, "Dad and Mum, where did you get lost?"

In 1977, 13-year-old Megumi was abducted on her way home from school in the city of Niigata.

On the night she went missing, her father, Shigeru, went to her school and looked in every toilet cubicle. Then, suspecting she might have been involved in a hit-and-run, he went on his hands and knees to search for a tire mark along the route she usually took to and from school.

Shigeru had turned 45 the day before. For his birthday present, Megumi had given him a comb, saying, "It's time for you to start looking spiffy."

This was her affectionate way of reminding him that he needed to be more mindful of his personal appearance, and her sweetness touched him deeply.

From that day on, he never went anywhere without that comb.

After devoting four decades of his life to searching for his missing daughter and praying for her safe return, Shigeru died on June 5. He was 87.

I will never forget a news conference he gave in the winter of 2004.

The Japanese government had just determined through DNA tests that, contrary to Pyongyang's claim, ashes returned from North Korea were not Megumi's.

"With profound anger, I protest against this fabrication of ashes," a grim-faced Shigeru said as he forced out his words in a low voice. There was no mistaking the sheer depth of the suffering he was being forced to endure.

The news of his death prompted me to open a book that is filled with memories of Megumi.

One photo shows Megumi riding a tricycle. In another. she is staring at a giraffe. And there are snapshots of Megumi with her twin little brothers whom she adored. Her mother, Sakie, also appears in many pictures.

But the book contains only one photo of Shigeru. Cuddling an infant Megumi, he is smiling shyly at the camera.

Ever mild-mannered around people, Shigeru refused to ever present himself as a tragic hero.

The years he was allowed to live with his daughter were short. But he more than made up for the brevity with his genuine love and caring. He was the very best father any daughter could wish for.