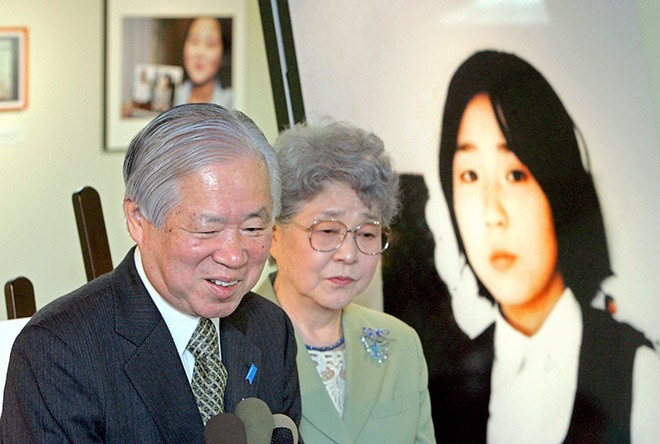 Shigeru Yokota and his wife Sakie answer questions from reporters in Yokohama in April 2006 with a photo of their daughter Megumi, right, and a photo of Kim Eun Gyong, Megumi’s daughter, in the background. (Asahi Shimbun file photo)

Shigeru Yokota, a pivotal figure in efforts to bring back Japanese nationals abducted by North Korea after his teenage daughter fell victim in 1977, died June 5 without ever being reunited with his child. His death at 87 was due to natural causes.

He is survived by his wife Sakie, 84, and twin sons, Takuya and Tetsuya.

Yokota headed the Association of the Families of Victims Kidnapped by North Korea from its founding in March 1997 with other families of abductees following mounting evidence that North Korea operated a state policy of abductions in the 1970s and '80s to teach its agents Japanese language and customs, among other purposes.

He resigned from the post in November 2007 for health reasons.

His daughter, Megumi, disappeared on her way home from school in Niigata, northwestern Japan, on Nov. 15, 1977. Megumi was a 13-year-old first-year junior high school student at that time. The Yokotas moved to Niigata after he was assigned to the city by his employer, the Bank of Japan.

Despite the family’s frantic search for clues into her disappearance, it only came to light in February in 1997 following media reports and Diet discussions that North Korea was behind the abduction.

Yokota then took the bold step of revealing his daughter's name to drum up public support for the return of abductees.

As head of the association, Yokota and his wife Sakie became symbolic figures in the movement calling for the repatriation of Japanese abductees.

Pyongyang handed over what it said were Megumi’s ashes to Japan in 2004. But the Japanese government announced that its DNA analysis showed they were from somebody else.

At some point during her enforced incarceration in North Korea, Megumi married Kim Young Nam, a South Korean who was also abducted by North Korean agents, and later gave birth to a daughter, Kim Eun Gyong.

Yokota and Sakie met their granddaughter along with Kim Eun Gyong's daughter, who is their great-granddaughter, in Ulan Bator, the Mongolian capital, in March 2014. It was the couple’s first encounter with Megumi’s offspring.

The Yokotas held numerous photo exhibitions in and out of Japan since 2005 documenting their daughter's 13 years in Japan to highlight the urgency of resolving the abduction issue.

The couple appeared together in more than 1,400 gatherings to call for the swift return of abductees.

Yokota's health deteriorated after he stepped down as head of the Association of the Families of Victims Kidnapped by North Korea, and had been hospitalized since April 2018 as he had difficulty walking and talking.

Yokota was born in Tokushima on the main island of Shikoku in 1932.

Prime Minister Shinzo Abe, meeting reporters on the evening of June 5, said of Yokota's death: “I feel heartbreaking grief, considering that Megumi’s repatriation has yet to be achieved. I am filled with a sense of extreme guilt.”

Abe reiterated that resolution of the abduction issue remains a top priority for his administration. He has urged North Korean leader Kim Jong Un to start a dialogue over the question without preconditions.

But as yet there has been no breakthrough in bilateral relations.

The prime minister said Japan must move forward decisively by seizing every opportunity to realize the return of Japanese abductees.