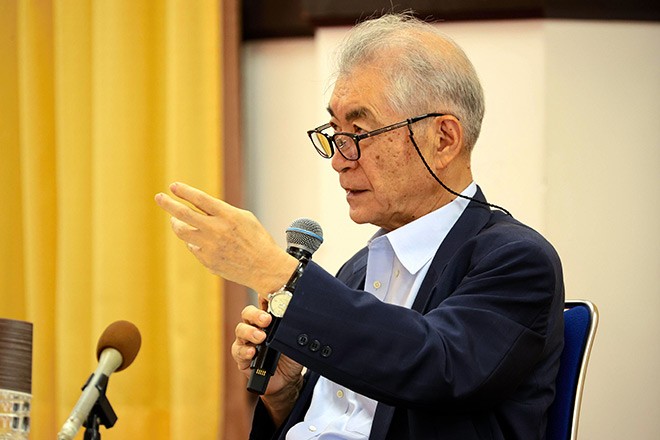 Nobel Prize winner Tasuku Honjo explains his decision to file a lawsuit against Ono Pharmaceutical Co. during a news conference in Kyoto on June 5. (Pool)

“Researchers in academia should be credited with their findings properly by society,” Honjo, special professor attached to Kyoto University, said at a news conference held there.

The lawsuit will be filed at the Osaka District Court in mid-June.

Ono Pharmaceutical, which manufactures and markets Opdivo, is based in Osaka.

Honjo, 78, was awarded the 2018 Nobel Prize in Physiology or Medicine for his research into the discovery of cancer therapy by inhibition of negative immune regulation, which led to the development of Opdivo.

A spokesperson for Ono Pharmaceutical declined to comment on the planned lawsuit on grounds the company had “not watched his news conference.”

The 22.6 billion yen the scientist is seeking stems from patent royalties that U.S. drug maker Merck & Co. paid to Ono Pharmaceutical for manufacturing and selling a drug similar to Opdivo.

Merck’s payment followed a settlement between the two drug makers in 2017 after Ono Pharmaceutical sued Merck for patent infringement regarding Keytrude, the U.S. company’s cancer immunotherapy drug, in 2014.

According to lawyers representing Honjo, Ono Pharmaceutical said it will pay him 40 percent of the patent royalties due from Merck after he cooperated in a lawsuit against the company.

But Ono Pharmaceutical later reneged on the deal and informed Honjo that his share will be 1 percent.

Honjo's lawyers estimated that he is due 22,623,300,000 yen in royalty payments made by Merck to Ono Pharmaceutical.

In addition, Honjo’s representatives argued last year that the researcher is actually entitled to receive more than 80 billion yen as a reward for his contribution to the development of the drug.

Aside from the 22.6 billion yen, Honjo's representatives said he is eligible to receive a patent fee from Ono Pharmaceutical and U.S. drug manufacturer Bristol Myers Squibb Co., both of which sell Opdivo.

Honjo plans to use the money to establish a foundation with 100 billion yen in funds to support young researchers.

He said Ono Pharmaceutical has proposed a donation of up to more than 30 billion yen to Kyoto University.

(This article was written by Ryosuke Nonaka and Sho Ito.)