Government to reveal who said what in expert panel virus talks 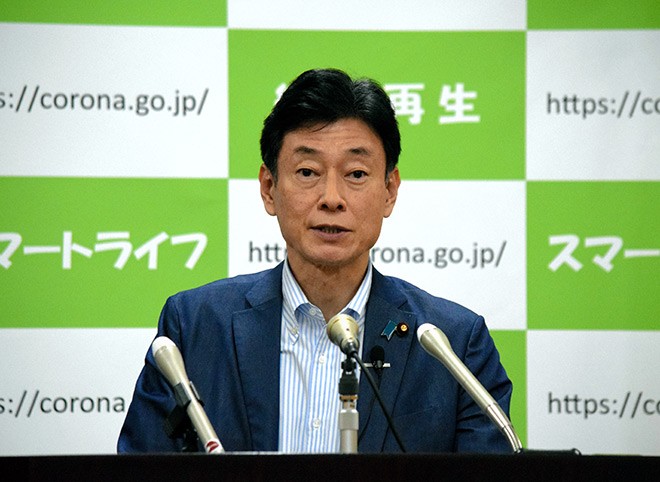 Yasutoshi Nishimura, the minister in charge of anti-coronavirus measures, speaks at a news conference in Tokyo on June 7. (Tomohiro Yamamoto)

The government is bowing to growing calls for more detailed records of an expert panel’s discussions about the novel coronavirus pandemic--at least in part.

Panelists will be identified by name from now on in the official records when they make comments during the meetings, it announced. But the government is stopping short of releasing the full details of the conversations about the deadly virus.

Yasutoshi Nishimura, the minister in charge of measures against the coronavirus, said on June 7 that the government’s policy of not producing detailed minutes of the panel sessions will remain unchanged.

He said after hearing what the panel experts had to say about producing records of their meetings, the government decided it will only create outlines summarizing the discussions, although it will now disclose the panelists’ names when they speak.

As for the panel’s first and third meetings, for which shorthand records have yet to be produced, Nishimura said the government will compile them based on audio recordings of the sessions.

He defended the government’s stance that excerpts of the meetings, rather than elaborate minutes, will suffice in light of the official records management guidelines.

Suga said at the panel's first meeting on Feb. 16 when government officials explained their position not to compile minutes to allow panel members to engage in free and candid discussions, panelists agreed to the arrangement.

The government received Cabinet approval for designating its response to the COVID-19 health crisis as a “historic emergency” under the official records management guidelines.

But the government drew fire from both academia and the public for lack of transparency after it replied to an industry journal's information disclosure request that the panel's meeting minutes did not exist.

Shigeru Omi, vice chair of the expert panel, suggested at a news conference on May 29 that the panel’s stance on how records should be kept differs from that of the government.

“There were almost none who opposed the idea of identifying who said what at panel meetings,” he said. “Personally, I see nothing wrong with revealing the names of the panelists concerning their remarks.”