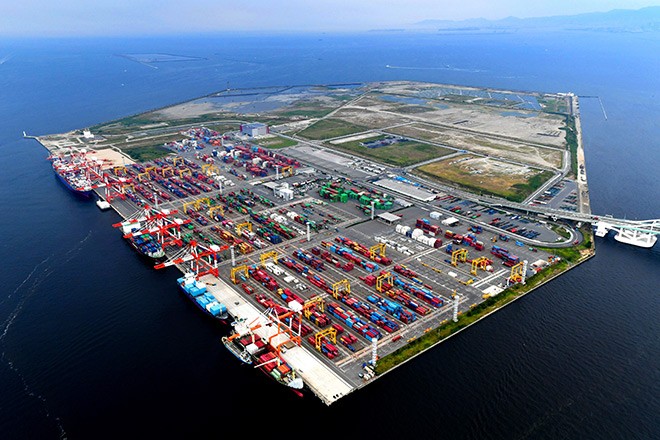 Yumeshima, a manmade island in Osaka Bay, is expected to be the site for integrated resort facilities featuring a casino (Asahi Shimbun file photo)

Storm clouds are gathering over Japan’s plans to open casino-oriented resort facilities as prospective developers eyeing entry into the market battle to restore their business fortunes drained by the novel coronavirus pandemic.

Even though some casino operators reopened following the lifting of closures on business activities, customer numbers remain low, adding to their financial woes.

On June 4, Osaka Mayor Ichiro Matsui announced a delay in the full opening of a planned integrated resort featuring a casino from the end of fiscal 2026 to a year or two after that.

He said the prime candidate in the joint IR project planned by the city and Osaka prefectural government was experiencing economic hardship and had contacted him about delaying work on the project.

Matsui said the city government is working to determine the best feasible time for the project to open, in light of the developer's financial woes.

On a global level, the casino industry has taken a heavy hit due to restrictions on travel to protect countries from COVID-19 infection.

U.S. gaming giant MGM Resorts International, which teamed up with Orix, a Japanese financial services group, to bid for Osaka’s IR project, reported $2.3 billion (250.6 billion yen) in sales over the first three months of 2020, down 29 percent from the same quarter a year ago.

Its pretax profit stood at $290 million, down a whopping 61 percent from the same period of 2019.

Bill Hornbuckle, acting CEO of MGM Resorts International, said in a telephone conference in late April that the company may be forced to submit its bid for the Osaka IR project at a later date.

Yoichi Torihata, a professor of business management at Shizuoka University who is well versed in the financial affairs of IR operators, noted that IR companies are experiencing enormous difficulties staying afloat during the health crisis.

“They have their hands full just maintaining their existing facilities,” he said. “After they reopen, they must have measures in place to avoid congested conditions and restrict the number of customers. It will not be easy for them to return to the earnings structure they had before the pandemic.”

Las Vegas Sands, a leading candidate for the casino project in Yokohama, announced its withdrawal in May.

Its sales from January to March plunged by 51.1 percent from a year earlier to $1.78 billion, leaving the company with a red ink figure of $51 million, according to financial results released by the operator.

“The framework around the development of an IR has made our goals there unreachable,” Las Vegas Sands Chairman Sheldon Adelson said in a statement, suggesting it would be difficult for the company to recoup a huge investment in Japan under a 10-year license to be issued by the Japanese government.

He said Las Vegas Sands needs to focus its energies on other opportunities outside Japan.

Hong Kong-based Galaxy Entertainment Group, which is keen to bid for the Yokohama project, also is battling dwindling sales.

The operator posted $5.1 billion Hong Kong dollars (71.7 billion yen, or $657 million) in sales over the January-March period, down by about 60 percent from same quarter a year earlier.

Pretax profits dropped to HK$280 million, down by more than 90 percent from the same period of 2019.

Ted Chan, chief operating officer of the Japanese arm of Galaxy Entertainment Group, said the coronavirus pandemic is certain to transform the casino and tourism industry in the long run, and perhaps have lasting consequences.

The COVID-19 crisis has also taken the toll on plans by local governments to announce time schedules for their IR projects.

Local authorities are expected to submit their preparation plans to the central government for venues where the IR facilities will be constructed between January and late July next year.

But the central government has yet to hammer out a strategy to evaluate their preparation plans despite its March deadline, as it has been kept busy tackling the coronavirus crisis.

Shota Otani, a senior researcher with Sumitomo Mitsui Trust Research Institute who is familiar with IR projects, said Japanese entities need to be flexible about scheduling.

“The risks of hitting a stumbling block will only heighten for IR projects if authorities try to stick with their original schedule at a time when developers of resort facilities are having difficulties raising funds,” he said.

(This article was written by Yuka Kanemoto, Shiro Matsuda and Keiko Nannichi.)