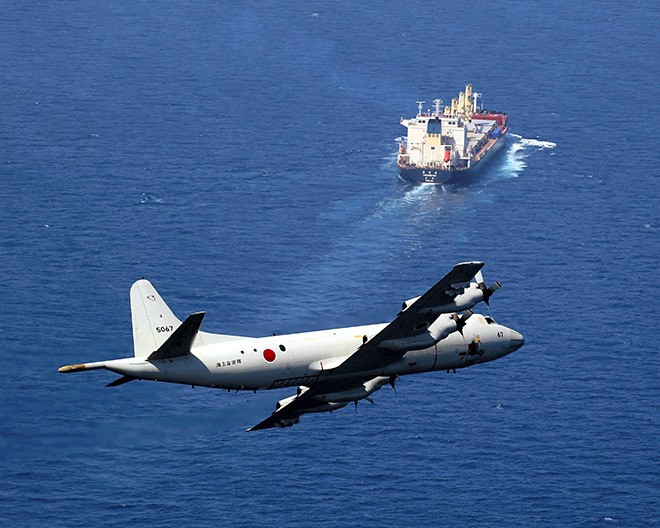 A P-3C patrol aircraft flies over a cargo ship off the coast of Somalia in 2014. (Asahi Shimbun file photo)

A Maritime Self-Defense Force unit stranded in Djibouti for around three months due to the COVID-19 pandemic will return to Japan in early July, sources said.

The P-3C patrol aircraft unit has been conducting an anti-piracy mission off the coast of Somalia and also gathering intelligence in waters in the Middle East since January.

They will be flown back to Japan after a new unit, which consists of 60 or so personnel, arrives as early as mid-June to take over their duties. In Japan, they will quarantine themselves for two weeks before returning to their homes.

The decision comes as the Djibouti government, which has imposed entry restrictions to curb the spread of the coronavirus, reached an agreement with Japan over the personnel rotation, the sources said.

Rotations for the MSDF unit were originally set every three months, but the current unit has now been up serving for around half a year because the replacement unit has been unable to enter the East African nation due to its entry restrictions.

The unit's two aircraft, which had maintenance deadlines, were replaced at the end of April.

The next 60 MSDF members scheduled to be deployed to Djibouti will also have to self-quarantine for around two weeks upon arrival there.

(This article was written by Yoshitaka Ito and Daizo Teramoto)