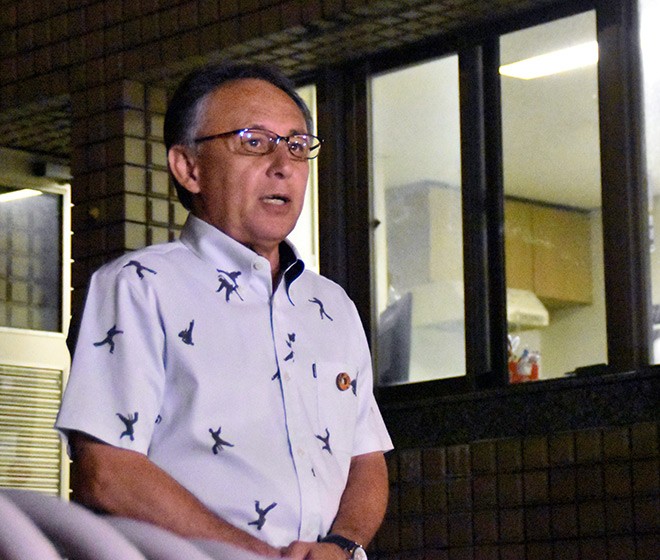 Okinawa Governor Denny Tamaki answers questions from reporters in Naha in the early hours of June 8 after his bloc secured a majority in the prefectural assembly election. (Shinichi Fujiwara)

NAHA--Okinawa Governor Denny Tamaki and his ruling bloc emerged from the prefectural assembly election with their majority largely unscathed, propelled by their staunch opposition to relocating a U.S. base within the prefecture.

Tamaki's renewed mandate from the June 7 election strengthens his position to oppose the central government’s controversial base relocation project on the main island of Okinawa, a fight that has stretched on for years.

The ruling camp won 25 of the 48 seats up for grabs in the election--still one seat fewer than what it had going into the election. The voting and counting took place the same day.

Tamaki has long opposed the relocation of U.S. Marine Corps Air Station Futenma in Ginowan to the Henoko district of Nago, also in the prefecture.

Tamaki told reporters early in the morning on June 8 after his bloc secured a majority in the election that he will continue calling for an end to the relocation plan, noting Okinawans showed their support in the vote to a certain extent.

“I think we have gained voters’ support for our stance (against the plan), so I’ll stick with it,” he said.

Tamaki also spoke to reporters when he arrived at the prefectural government building on the morning that day, saying he will renew his commitment to managing his administration in good faith.

The Liberal Democratic Party in opposition in the prefectural assembly endorsed or backed 21 candidates, but only 18 won a seat in the election. Even combining seats won by Komeito, the LDP’s partner, along with other forces, the opposition bloc failed to gain a majority of seats.

According to the prefectural election administration commission, the turnout dropped from the 53.31 percent recorded in the previous election to a record low of 46.96 percent this time.

Tamaki won the gubernatorial election held in September 2018, following the sudden death of his predecessor, Takeshi Onaga, by carrying out his wishes in opposing the base relocation plan.

But that fight has been an uphill battle with the work under way. Two months after Tamaki took office in October 2018, the central government began pouring earth and sand in a portion of the planned reclamation area off the Henoko district.

The reclamation work has been suspended since April, though, due to the coronavirus pandemic.

In a February referendum, more than 70 percent of Okinawan voters opposed the land reclamation work off the Henoko district for the relocation of Futenma within the prefecture.