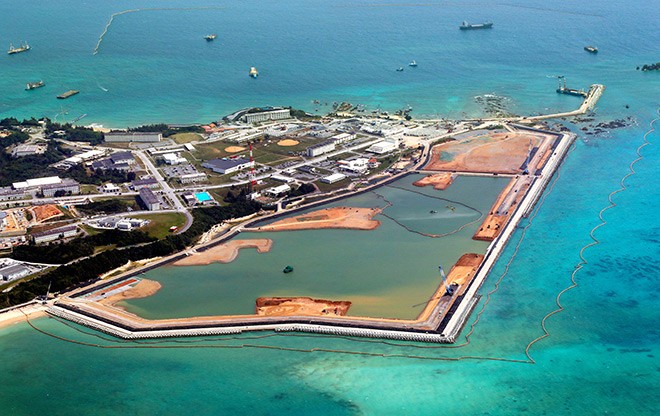 Landfill work is under way off the Henoko district of Nago, Okinawa Prefecture, on March 26 to build a new U.S. base to relocate U.S. Marine Corps Air Station Futenma in Ginowan, also in the prefecture. A soft seabed has been discovered in the area in the background. (Eiji Hori)

As the number of the assembly seats controlled by his camp decreased by one, Tamaki refused to celebrate the election results, saying they represent a “severe” verdict by voters.

But the outcome can be interpreted at least as a degree of voter approval for his 20 months of efforts as the local government chief.

The election campaign was overshadowed by the effects of the new coronavirus outbreak.

Since the crisis began, Tamaki has been grappling with the tricky challenge of stemming the spread of the virus while keeping the local economy, which is heavily dependent on tourism, from tanking.

Tamaki has inevitably had to slog through problems while learning lessons from the process, which also strained the nerves of his aides.

Critics of the governor campaigned on promises to revitalize the local economy through close cooperation with the central government. But their messages apparently failed to find a resonance among voters.

The decision by Komeito, the partner of the Liberal Democratic Party in the opposition alliance in the assembly, to limit the number of its candidates amid voluntary restrictions on campaigning also contributed to the opposition camp’s failure to win a majority.

The biggest policy challenge facing the prefecture is to enhance the capabilities of the local medical system to deal with a possible second wave of infections while curing the ailing economy. This requires colossal nonpartisan efforts.

Tamaki needs to meticulously explain his strategy to wrestle with the challenge to citizens and win the support for his policy plans from the new assembly.

Needless to say, one big election issue was the central government’s plan to build a new U.S. military base off Henoko, a district in the city of Nago in the southernmost prefecture, to take over the functions of U.S. Marine Corps Air Station Futenma in Ginowan, also in the prefecture.

The LDP clearly supported the Futenma base relocation plan in its campaign platform, for the first time. But the election outcome again confirmed solid opposition to the plan among the local public.

Voters in Okinawa have consistently rejected the proposal in a series of local votes including the gubernatorial election in 2018, the prefectural referendum on the issue in February 2019, a Lower House by-election in April and an Upper House poll in July the same year as well as the latest prefectural assembly election.

It is high time for Prime Minister Shinzo Abe’s administration to stop adhering adamantly to the position that the Henoko base plan is the “only solution” to the problem of the safety threat posed by the Futenma air base, which is located in a densely populated residential area.

On April 21, the government submitted a formal request for the Okinawa prefectural government to allow a change in the design of the reclamation work to build the Futenma replacement facility, the day after the local government declared a state of emergency on its own in response to a surge in confirmed cases of infection with the virus.

While some related works have been canceled as a result, the government paid more than 30 billion yen ($277.32 million) to the contractors because the works had already been formally contracted out.

The change in the design has been mandated by the discovery of extremely soft ground under the seabed in parts of the area where the reclamation work is under way to build the facility.

Even after drilling surveys discovered a vast expanse of soft ground, the Abe administration did not publish the discovery and forged ahead with the works. The upshot is a huge amount of wasted money.

Even if the prefectural government permits the change in the design, the overall cost of constructing the new facility will surge by about 170 percent from the original estimate to some 930 billion yen while construction will take 12 years to complete, according to the government’s new projections.

It is glaringly obvious that the Henoko base plan is bankrupt. Many people who are not supporting Tamaki are now voicing doubt about the plausibility of the plan.

One candidate for the assembly election who took a neutral position on the issue pointed out the need to make a fresh assessment of the rationality of the works.

An early closure of the Futenma base and return of the site to Okinawa is a common wish among people in the prefecture, whether they support Tamaki or not.

The only approach the government can take requires serious talks with the United States over measures to reduce the disproportionately heavy burden of hosting U.S. bases borne by the people of Okinawa, including transferring military drills at the Futenma base to other locations.