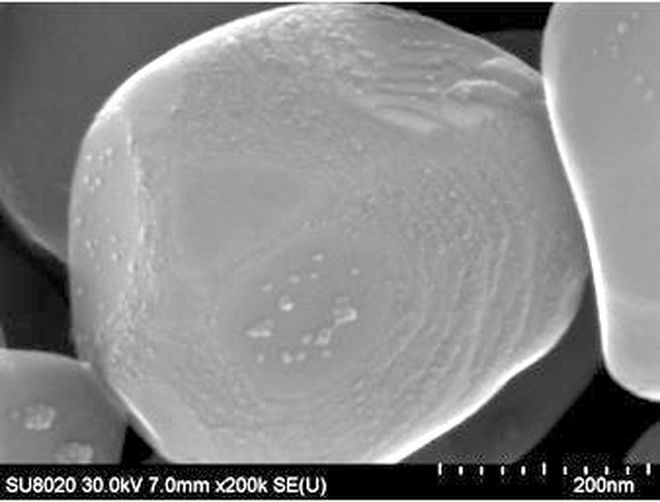 These strontium titanate particles, measuring several hundreds of nanometers in size, were used as a photocatalyst. (Provided by Kazunari Domen)

A new study is brightening the outlook for a prospective chemical engineering process that could one day lead to greener energy alternatives than fossil fuels by harnessing sunlight to produce mass quantities of hydrogen.

The research results, published in the journal Nature, could help light the path toward establishing a hydrogen economy in the future.

The team of scientists for the study improved the technology involved in a process called “water splitting,” which essentially uses light to break down water into hydrogen and oxygen with the help of a newly developed photocatalyst. Sunlight and water are renewable resources and hydrogen is a potential clean alternative fuel source.

The team of scientists reported they created an almost perfectly efficient photocatalyst for ultraviolet light. A photocatalyst is something that absorbs light and causes or accelerates a chemical reaction, in this case for changing water into oxygen and hydrogen gases.

It is currently still an impractical technique for creating large amounts of hydrogen at an industrial level because the photocatalyst works efficiently only with ultraviolet light with certain wavelengths. This means it is not economically viable yet.

In the past, other photocatalysts have mostly registered around 10 percent or less for solar energy conversion efficiency, known as their rate of quantum efficiency. In some of the better cases, a few surpassed 50 percent.

But this photocatalyst can convert ultraviolet light at nearly 100 percent efficiency, the study reported.

The researchers from Shinshu University, the University of Tokyo and other institutions in Japan noted they have only been able to achieve such a high level of efficiency for ultraviolet rays--unlikely to sustain large-scale hydrogen production.

But if the same principles can be adopted to use other parts of the light spectrum at a relatively high quantum efficiency, that could be a major step toward enabling the creation of a solar-hydrogen industry.

“Visible light is available in large quantities, so an efficiency of 30 percent or so would likely be sufficient to allow practical implementation of hydrogen production by using this method,” said one of the team leaders, Shinshu University special contract professor Kazunari Domen.

The research team achieved the promising results by adding aluminum to particles of strontium titanate, which is a semiconductor material, to create the photocatalyst. They used cocatalysts strategically to improve generating hydrogen and oxygen.

They achieved a quantum efficiency of nearly 100 percent for ultraviolet rays with wavelengths of 350 to 360 nanometers. A nanometer is one-millionth of a millimeter.