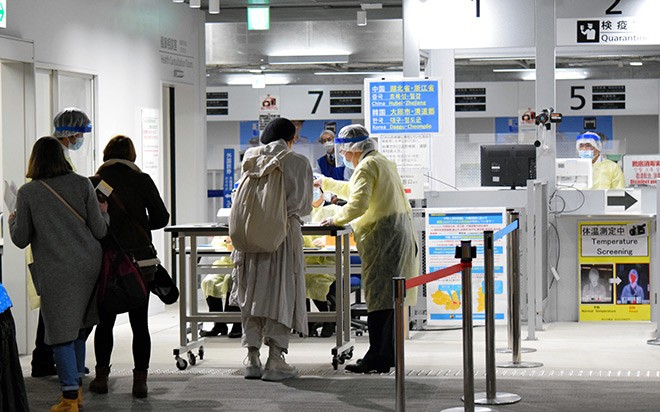 Japan bans entry to “foreigners” from 111 nations and regions to prevent the spread of the novel coronavirus. (Asahi Shimbun file photo)

With cross-border movements of people virtually suspended due to the pandemic, foreign residents in Japan have been thrown into a particularly difficult predicament.

As part of the government’s infection prevention measures, no foreign nationals who leave Japan will be allowed re-entry, including those whose primary country of residence and livelihood is here.

Many are upset because they cannot even make a quick trip to their home country in an emergency.

We agree this is an unreasonable policy that calls for immediate revision.

The government currently bans entry to “foreigners” from 111 nations and regions. The ban applies even to those who have permanent residence status in Japan, as well as spouses of Japanese.

In principle, none of them will be re-admitted if they leave for one of those countries and regions. Immigration authorities are urging them to just stay put.

But given the varied needs of individuals, such a blanket policy is hardly realistic.

Some want to visit their gravely ill relatives abroad. Others want to fix their faltering overseas businesses on site.

These are legitimate reasons for wanting to leave Japan temporarily, but the government’s intransigence is causing problems on many fronts.

Those who had no choice but to travel abroad are stuck there, unable to rejoin their families.

The case of a foreign national whose mother died abroad was brought up during a Diet session last month.

A Japan resident for 11 years, the individual gave up attending her funeral to pay final respects after authorities said re-entry would not be permitted.

We must say this was a blatant violation of human rights by the Japanese government.

Of the foreign nationals subject to the current re-entry restrictions, “permanent residents” are those who have lived in Japan for 10 years or more as tax-paying members of society. They number about 800,000, many in positions of responsibility in various fields.

The pandemic has revealed the shallowness and cheapness of the government’s slogan of “coexistence with foreigners.”

Other advanced nations are as diligent as Japan in trying to stop the novel coronavirus at national borders, but they do not subject long-term residents and spouses of their citizens to exceptional re-entry restrictions.

This is only to be expected given that these individuals are who they are because of their families, homes and jobs—all in their countries of residence.

All Japan has to do is to re-admit those foreign nationals, check them for the contagion at ports of entry and ask them to self-isolate if they are infected.

There is absolutely no reason why they should be treated differently from Japanese nationals or special permanent residents, such as ethnic Koreans.

After the issue was debated in the Diet, the Immigration Services Agency added this remark on its website: “Permission for landing may be granted depending on the individual situation if there are special exceptional circumstances, particularly such as when there are circumstances that require humanitarian consideration.”

However, the agency does not provide any real solution because no specific criterion is given for “circumstances that require humanitarian consideration.”

Whatever the nationality, every individual must be treated as a “person.” If the government is incapable of understanding this basic principle, nobody will trust whatever it says about welcoming foreign talent into society.