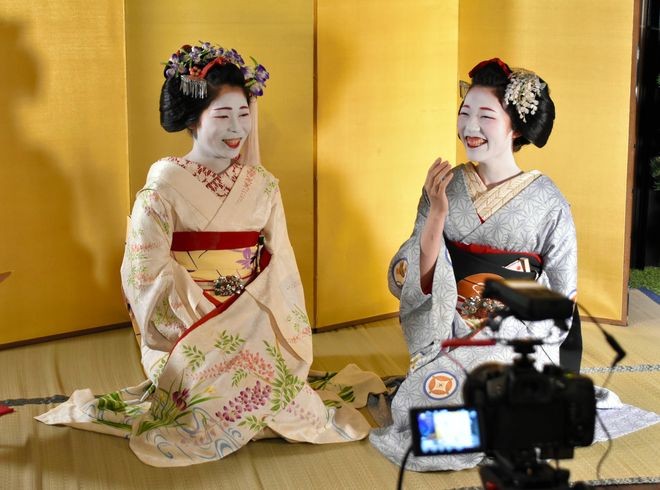 Kikue, right, and Kikunami perform during a live stream on May 13 in Nara. (Takumi Okada)

NARA--Apprentice geisha swinging golf clubs out on the green and knocking back sake after losing a traditional drinking game might prove an eye-opener to people steeped in sedate images for which proteges of Japan's ancient entertainment art are known.

But new videos by two of this city's few geisha-in-training temporarily turned YouTubers may change that.

Geisha culture was already on the verge of passing into history here before the COVID-19 pandemic struck.

Now, with all of their performances canceled due to the virus, the pair of "maiko" trainees are trying their hands as YouTubers to connect with fans and attract fresh apprentices.

On their own YouTube channel, Kikue, 20, and Kikunami, 19, offer viewers a candid look inside their daily life, showing scenes of training, performances and the pair just goofing around through videos they upload and live streaming.

A video featured them showing how "maiko" apply their trademark white facial makeup. It racked up more than 16,000 views.

In April, after people everywhere chose to stay home rather than go out and risk infection from the novel coronavirus pandemic, the duo started live streaming to share everyday moments of the local nightlife district and the world of maiko.

The videos also offer customers of the Tsuruya teahouse, to which Kikue and Kikunami belong, a virtual stand-in for the live shows they had to scrap.

“We kept training even after our performances were canceled due to virus, but I feel sad about not being able to appear in front of an audience,” Kikue said. “I hope people will check out the videos to see how we're progressing.”

Kikue and Kikunami are among three maiko maidens in the local Ganrinin entertainment zone south of the World Heritage temple of Kofukuji. Their teacher, Kikuno, 47, is the only geisha there.

But Ganrinin, unlike Kyoto, went into decline after Japan’s rapid postwar economic growth ended in the early 1970s.

In 2012, Kikuno started a campaign to revive Ganrinin. As part of the endeavor, a project is under way to develop maiko culture, and an annual recital is organized so geisha invited from traditional nightlife areas across the nation can demonstrate their dance skills.

The maiko began uploading their videos during the New Year holiday period. Both became interested in working as maiko from seeing TV shows posts online about traditional entertainment districts.

The pair asked Takahiro Uemura, 42, a video creator they knew, to film them, edit the footage and upload more than 30 of the videos to their channel to date.

Their online campaign to attract people to the world of geisha appears to be working.

In spring, a second-year Tokyo high school student contacted Kikue and Kikunami after watching one of the videos, asking how she could become a maiko.

Kikuno interviewed the student and advised her to contact the maiko again after "soul-searching about her future plans until her graduation.”

In a live stream in mid-May shot at an empty Ganrinin restaurant, Kikue and Kikunami played samisen and danced in rotation for an hour on a rush mat set up in front of a simple golden folding screen.

They also played well-known forms of traditional geisha games, such as “konpirafunefune,” “toratora” and “yakyuken,” with Kikue having to knock back a cup of sake as a penalty for losing a game.

Another video demonstrated how geisha get attired in their elaborate outfits and a Kyoto hairdresser showing the intricate process of arranging a maiko’s hair.

The maiko also weren’t above descending into typical YouTuber gags, as demonstrated in their videos devoted to them eating hot, instant “yakisoba” noodles, golfing in full white maiko makeup while wearing traditional pantaloons and socks, and engaging in other antics.

Only Nara maiko can make videos that offer such an insider perspective to the local entertainment district, Kikunami insisted, referring to the difference of status of geisha trainees in Nara to Kyoto, where the word maiko is written in different kanji characters.

“People feel traditional entertainment districts are difficult to visit because of their luxury image, and those from our generation are typically not familiar with the areas,” Kikunami said.

“We are showing a real-life image to make people feel captivated by maiko," she said. "That can only be done by maiko in Nara, a nightlife area with a long-established history, not Kyoto.”

By June 19, more than 2,100 people had subscribed to the YouTube channel. When the subscriber number reached 1,000 in March, Kikuno performed a dance at a historic restaurant for a video to express appreciation.

Future videos in the works include the incongruous image of maiko instructing how to submit annual income reports to tax authorities, along with giving a sake brewery tour, and a lesson on how to cook rolled Japanese-style omelets at an upscale restaurant.

Kikuno also plans to post videos in which she will introduce nighttime entertainment districts in areas including Gifu Prefecture, and Atami in Shizuoka Prefecture, which she hopes to promote on YouTube featuring special guests.

“Forging ahead aggressively with fresh projects while paying respect to tradition is important,” Kikuno said. “From a historic perspective, maiko are like pop idols that people can directly interact with easily. I hope our videos make people feel closer to them.”