Nara deer poop back to normal now that tourists are gone 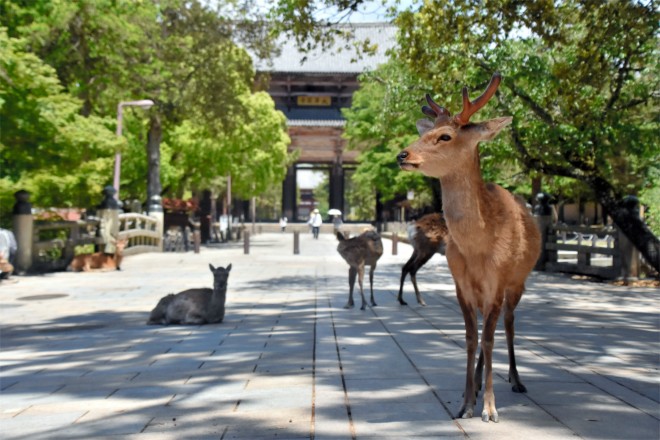 A herd of wild deer look lonely in Nara Park, where tourists have disappeared due to the virus outbreak, on May 14 in Nara. (Akira Nemoto)

NARA--As Nara's tourists emptied out, so did its iconic deer--so to speak. For the deer, the change looks good.

Around the world, lockdowns and stay-at-home campaigns have led to rare images of wild animals freely roaming urban streets, shared widely over social media under the witty meme, “Nature is healing, we are the virus.”

In Nara Park, nature is healing. And calling.

The large, idyllic public park in the capital of Nara Prefecture is a quintessential sightseeing spot and a major tourist draw, where people come from all over to fawn over the famously well-mannered deer. Students on school trips and foreign visitors flock there to feed hundreds of wild deer a snack called “shika senbei” (deer rice crackers).

Naturally, they have to watch where they step because the park is also known for the black, round droppings scattered all over the ground.

But in recent years, the deer--clearly overfed--have suffered from a gastrointestinal condition and persistent diarrhea.

“Especially in crowded areas like Todaiji temple, deer feces tend to be soft and diarrheal,” said Yoshitaka Ashimura, a secretary-general of the foundation for the protection of deer in Nara.

Their staple foods are normally plants and nuts. They snack on shika senbei, made mainly out of flour and rice bran, Ashimura said.

Shika senbei are nutritionally rich. But when the deer eat too many, they become very thirsty.

As the number of foreign visitors increased, the deer gorged more and more on shika senbei snacks, not to mention whatever else they may have been fed.

“I suspect some deer ended up drinking too much water,” Ashimura said about the pre-pandemic days.

Wild deer droppings in Nara Park have long been affectionately referred to as “black beans” because of their color and shape.

Famous movie star Sayuri Yoshinaga once sang about the “beans” in a song called “Nara no Kasugano.”

“But in the past few years, many of the droppings were diarrheal and watery,” observed Toshiharu Takaki, a 76-year-old Nara resident who has frequented the park for 40 years.

But then the COVID-19 pandemic hit the tourism industry hard.

The number of foreign visitors nationwide in April was just 2,900. That’s a record 99.9 percent drop from April 2019, according to the Japan Tourism Agency.

Takaki immediately noticed that the "black beans" had returned.

“Starting from around March, deer droppings have got back into their normal, healthy shape: round and rolling. The smell has also become less stinky,” he said.

Ashimura also noted the improvement in their movements.

“Shika senbei is no problem, as long as they take it easy and only eat it as a snack,” Ashimura said. “It’s best to keep everything moderate and light.”

College cinema clubs link up for anthology movie amid pandemic

Daily health check? Toto asks that you take a seat in bathroom