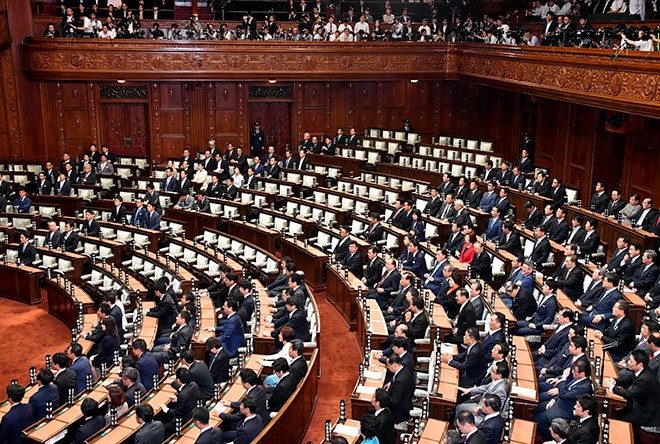 An extraordinary Diet session is convened on Sept. 28, 2017, about three months after the opposition requested it. (Asahi Shimbun file photo)

In an unprecedented ruling, a court confirmed that a Cabinet is bound by the Constitution to convene an extraordinary Diet session if requested by at least a quarter of members of either Diet chamber.

Although the Naha District Court did not directly address any constitutional violations by the Abe Cabinet, its decision on June 10 was welcomed by plaintiffs in a lawsuit filed against the government.

Four current and former Diet members representing Okinawa Prefecture sued the government over a request submitted to the Cabinet on June 22, 2017, to hold an extraordinary Diet session.

More than a quarter of Diet members, including the four plaintiffs, submitted the request for the session to get to the bottom of scandals tied to Prime Minister Shinzo Abe and his wife, Akie.

For the first time in a lawsuit in Japan, the plaintiffs brought up Article 53 of the Constitution, which states that a Cabinet must decide to convene an extraordinary Diet session if one-fourth of the members of either chamber wants one.

The Abe Cabinet did convene an extraordinary Diet session on Sept. 28, 2017, 98 days after the request was submitted.

But before Diet deliberations could begin, Abe dissolved the Lower House and called a snap election, denying opposition lawmakers a chance to further question Abe about suspected political favoritism given to two educational institutions, Moritomo Gakuen and Kake Educational Institution.

The district court said that based on Article 53, the Cabinet had a political and legal “obligation under the Constitution” to convene an extraordinary Diet session.

Failing to convene an extraordinary session “leaves open the possibility of an assessment that (the failure) was unconstitutional,” the ruling said.

Government lawyers argued that decisions on whether to convene an extraordinary Diet session were “political action of a high degree,” and therefore, the lawsuit was not one that the judiciary should handle.

But the district court brushed aside that argument. It ruled that the Cabinet’s failure to meet its obligations would weaken the spirit of Article 53, which seeks to reflect the opinions of a minority of lawmakers in the Diet. That, in turn, would leave open the possibility of upsetting the balance of powers between the Diet and Cabinet.

For those reasons, the ruling stated, there was a strong need for the judiciary to make a decision on the matter.

The court rejected the plaintiffs’ demands for 10,000 yen ($94) each in compensation, saying the Cabinet’s obligation under Article 53 was not intended to be directed at individual Diet members.

Still, plaintiffs and their lawyers were happy about the overall ruling.

Keiko Itokazu, a former Upper House member, said at a news conference in Naha that the ruling was an accurate assessment of Article 53.

She blasted the Abe Cabinet for “not implementing what is clearly written in the Constitution and making all decisions based on the large majority held by the ruling coalition.”

She also touched on the court’s judgment that Article 53 was intended to give a voice to the minority, saying she often felt that views from Okinawa were not being heard in the Diet.

“A genuine democracy will not exist if the small voices of the people are simply ignored,” Itokazu said.

Yukihito Oguchi, a lawyer for the plaintiffs, said the unprecedented ruling should lead to a better balance of power.

“The Diet has become a subcontracted organ that is only convened when the Cabinet feels there is a need,” Oguchi said. “We were able to win a ruling that states an extraordinary Diet session must be convened if such a request is made. I hope this issue will be discussed in the Diet.”

The ruling could have legal ramifications for the Abe Cabinet. The administration plans to allow the current Diet session to close as planned on June 17. The opposition is demanding an extension of the session to discuss how to deal with the novel coronavirus pandemic.

If the Diet session does end, the opposition would likely submit a request for an extraordinary session.

(This article was compiled from reports by Shohei Okada and Kentaro Yamano in Naha and Senior Staff Writer Shuichi Yutaka in Tokyo.)