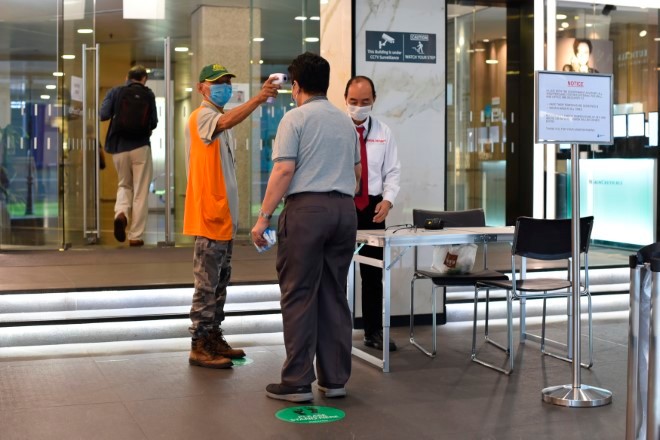 A man wearing a face mask uses a thermal scanner to check on the temperature of an individual before he can enter a building in Singapore on June 2. (AP Photo)

SINGAPORE/JAKARTA--Indonesian motorcycle taxi driver Aji chain-smokes and checks his smartphone constantly while waiting for orders by the roadside in downtown Jakarta on a hot June morning, but is staring at the prospect of another fruitless day.

Before the coronavirus outbreak hit, the 35-year-old father of four would ferry at least 20 passengers for a daily income of between $13 and $20 (1,390-2,138 yen) as a driver for homegrown ride-hailing app Gojek.

But when transportation services halted under a city lockdown, Aji considered it a good day if he got more than two food delivery orders, which pay him $0.70 each time. On some days, he has had none. Even with restrictions eased this week, he is struggling to feed his family.

“The situation is that there are many drivers but orders are few,” he said, asking to be identified only by his first name.

Eleven drivers for Gojek and Grab, which is backed by Softbank Group, in Indonesia, Vietnam and Thailand told Reuters they’ve similarly struggled, with income slashed by more than half as the pandemic batters Southeast Asia.

And, disappointingly, for both drivers and the companies, an increase in food deliveries--forecast as a major growth area for both firms--has come nowhere near compensating for the losses in transport.

Even in Vietnam, seen as a recovery success story, drivers are reeling.

“The pandemic may cost me and many colleagues our vehicles, which we had bought using borrowed money,” said Grab car driver Tung in Hanoi, fearing that lenders may repossess the vehicles.

Their plight threatens a core promise of both companies: that they can improve the lives of tens of millions of people across Southeast Asia even as they provide big paydays for their blue-chip corporate and financial investors.

Southeast Asian governments have warned millions could end up jobless as a result of the outbreak.

The two firms told Reuters they are supporting drivers with measures ranging from food packages and vouchers to low-interest bank loans and car rental rebates. But the crisis has also led them to cut the subsidies that have fueled their growth.

Doubts have also crept up about the ride-hailing model globally and on whether investors will continue pumping in massive funds into the startups.

Even before the pandemic, Grab and Gojek--like Uber and Lyft in the United States and other ride-hailing firms around the world--were operating at a steep loss.

Both companies still have plenty of cash. One source with knowledge of the matter said Grab has $3 billion in reserves. Sources familiar with Gojek’s finances said it was finalizing an over $3 billion investment round at a $10 billion valuation; Facebook and Paypal announced investments in Gojek’s fintech arm just last week, and it also counts Google and Tencent among its backers.

Each has avoided major layoffs so far, though Grab is implementing voluntary unpaid leave for staff and Gojek is reviewing its services. In the United States, Uber, whose Southeast Asia business was bought by Grab, said it would cut 23 percent of its workforce. “Transport has fallen off a cliff, food has held steady, while logistics went through the roof and online payments are high... so having a portfolio of products helps,” said Gojek Chief Operating Officer Hans Patuwo. “If we were only a transport company, I’d be quite bowled over.”

Executives and investors at both firms point to the resurgence of orders at Chinese ride-hailing company Didi Chuxing as cause for optimism.

The crisis has revived speculation among investors about a merger of the two firms, which sources say has been discussed in early 2020, but not led to serious talks.

Gojek said any reports of a merger are inaccurate. A Grab spokesman declined to comment.

Grab and Gojek have long touted the fast-growing food delivery industry as a big opportunity. But with platforms taking only a 20 percent-30 percent commission that is shared with drivers, margins are slim. And growth did not materialize in every market during the lockdowns.

A restaurant chain CEO in Jakarta said food delivery had not picked up in Southeast Asia’s largest economy due to people cooking more at home and as most orders traditionally consisted of lunches for office workers, who are now at home.

Aji described food delivery in Indonesia for Gojek as a “fight,” with “sometimes 50 drivers for one order,” with Grab Vietnam drivers recounting similar experiences.

Even in Thailand, where orders jumped for both Grab and Gojek, profitability remains distant.

According to an April interview with local media by then Grab Thailand chief Tarin Thaniyavarn, food delivery was fast-growing but loss-making during the pandemic, with costs mounting and competition steep.

“Imagine last year’s loss-making business growing rapidly in a short period of time, while the business that used to make profits for us is nearly gone,” he said.