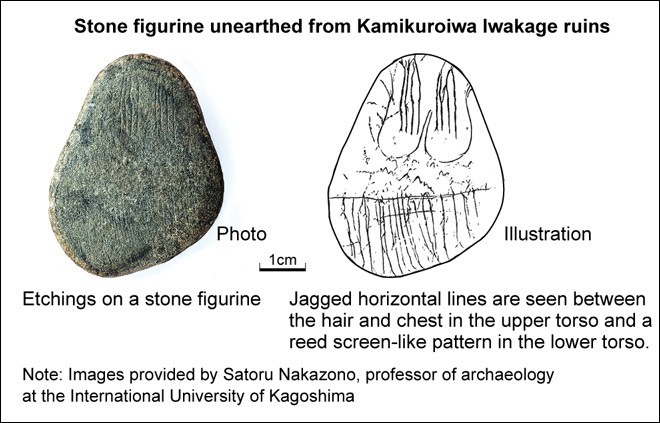 KUMAKOGEN, Ehime Prefecture--Prehistoric people in Japan fashioned human figures from stone and adorned them with jagged lines, possibly for use in religious rituals, say researchers startled by discoveries in the island of Shikoku.

The artifacts unearthed from the Kamikuroiwa Iwakage ruins in Ehime Prefecture date from 14,500 years ago at the start of the early Jomon Pottery Culture Period that lasted until 1000 B.C.

A team of researchers headed by Satoru Nakazono, a professor of archaeology at the International University of Kagoshima, scanned the items with 3-D imagery.

"The traces and styles of carving suggest the lines must have been drawn by hand," Nakazono said. "That suggests they may have had religious significance."

The figurines are among 13 stone-made artifacts each measuring several centimeters at a site here occasionally described as an ancient graveyard.

Many vertical lines were finely carved on the belly portions that resemble a reed screen.

Earthenware, stone tools, human remains, one with a bone spatula in the pelvis area, as well as bones of dogs, were discovered under an eave-shaped rock in a mountainous area.

The site was developed in the early Jomon Pottery Culture Period and excavated in the 1960s and '70s.

Hair- and breast-like designs were also found on some of the carvings, which possibly could have served as safe birth charms. No similar findings have been made elsewhere in Japan.

Because the lines on the stone items were not deeply etched and thus effectively invisible to the naked eye, Nakazono and his colleagues shot high-resolution photos of more than half of them last year to create 3-D replicas for analysis.

The findings revealed many horizontal saw-toothed lines etched on the belly and other sections of at least one stone figurine.

Experts had strongly suspected that serrated patterns would be found, but this is the first time so many jagged lines have been confirmed through high-quality imaging.

"Comparing the findings with primitive paintings all over the world, the depictions may be horizontally drawn female genitalia," said Hideji Harunari, professor emeritus at the National Museum of Japanese History and expert on Japan's prehistoric culture.

The findings were published in a quarterly publication themed on archaeology released by Yuzankaku Inc.