Alert over, Tokyo closer to OK for all businesses in capital to reopen 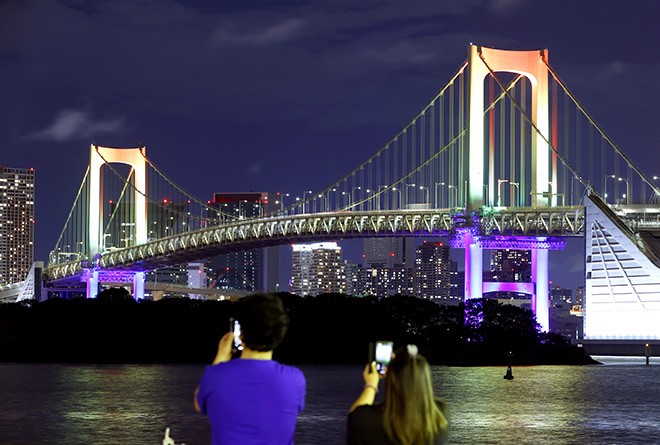 The illumination of Rainbow Bridge changes from red to a rainbow of colors after the Tokyo metropolitan government lifted on June 11 the alert urging local residents to remain cautious about COVID-19 infections. (Ryo Ikeda)

Though some Tokyoites cheered the June 11 lifting of the capital’s COVID-19 alert as a chance for an overdue beer at a bar, others expressed hesitation to deviate from staying as far away from people as possible.

Interviews with Tokyo residents a day after the capital's alert ended indicated the relaxing of almost all business-closure requests by the Tokyo metropolitan government will not likely lead to packed bars, restaurants and “izakaya” pub-style restaurants.

On the morning of June 12, as the metropolitan government shifted to step three of its three-stage road map to allow for the resumption of business operations, a 25-year-old company employee standing in front of JR Shinbashi Station in the capital’s Minato Ward was already planning a drinking session with colleagues.

The man said he had refrained from such activities for about two months.

“I can finally let my hair down,” he said. “I want to increase the occasions for friendly gatherings among my fellow workers.”

But a 55-year-old company employee from Hachioji in western Tokyo said, “I want to slug back a few beers at an izakaya because it’s so hot but I don’t think I should be really enjoying myself.”

The man said he had become so used to the extended period of requests from Tokyo Governor Yuriko Koike to refrain from nonessential outings that, “I’m still afraid about going to places where there are a lot of people.”

Koike, speaking with reporters on June 11, said the relaxing of business-closure requests meant the capital had entered a new stage concerning social and business activities.

“Until now, we have asked local residents to restrain their activities, but from now it will be time for each resident to protect themselves (against infection),” Koike said.

A 23-year-old female company employee expressed concern about whether the alert was being lifted too early and said she is still unsure of what to do if she is invited out for drinks.

“I don’t want to go to karaoke parlors because it is a confined location,” she said. “I may take part gradually in drinking sessions at restaurants that have open-air spaces.”

Meanwhile, a video game amusement center near JR Takadanobaba Station opened for the first time in about two months.
A 35-year-old man living in Yokosuka, Kanagawa Prefecture, had lined up in front of the Mikado center before it even opened at 10 a.m.

Employees of the company that operates the arcade were scrambling to prepare for the reopening.

They only learned two days ago that video game centers would be allowed to resume operations once the metropolitan government moved to step three of its road map.

“We were caught off-guard by the sudden decision to move (to step three),” said Yasushi Fukamachi, 46, a company representative. “We were really busy preparing from last night.”

The Mikado has about 220 machines featuring video games that were popular in the 1980s and 1990s, meaning that many customers are middle-aged or older.

On an average weekday pre-COVID-19, the center attracted about 500 customers. It was not unusual for it to draw 1,000 customers on weekends.

But under the new normal, employees will now periodically disinfect the interior and also open windows to ventilate the center.

“That may lead to noise leaking out to the surrounding area, but we want to create an environment where our customers can enjoy themselves in a safe manner,” Fukamachi said.

There are plans to set up partitions between the game machines.

The move to step three means there are now only a very few business sectors, such as live music venues, that are still being asked to remain closed.

Metropolitan government officials indicated they might move to also allowing music venues and cabaret clubs where staff are in close contact with customers to resume operations from June 19 as long as the facilities implement appropriate measures to prevent a further spread of COVID-19 infections.

The requests to restaurants to limit business hours will be completely removed on June 18, the officials said.

A major factor for deciding whether to remove the remaining business-closure requests will be keeping the number of new infection cases under the benchmark of 20 that the metropolitan government set as criteria to lift the alert.

Restrictions on events will also be gradually relaxed from June 19. Those held indoors will be limited to a maximum of 1,000 participants. The number of participants would also have to be half or less of the capacity of the venue.