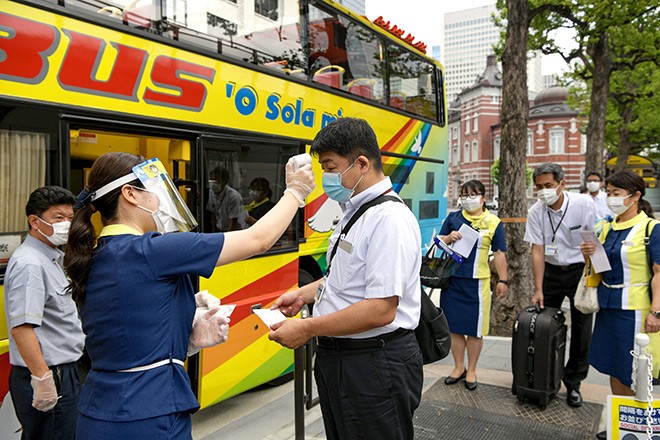 A tour guide of Hato Bus Co. checks the body temperature of a company employee who plays a role of a customer in a test run of a bus tour in Tokyo’s Chiyoda Ward on June 8. (Takayuki Kakuno)

The tourism industry, hit hard by the COVID-19 pandemic, has found a new selling point: protection from the novel coronavirus.

The sector has been gearing up for a resumption of domestic tours since the central government announced it will incrementally lift its requests for the public to refrain from traveling.

Tourism companies expect that demand will gradually recover starting from day trips and visits to nearby tourist spots.

For now, they plan to require sightseers to wear masks, check their body temperatures and take other precautions.

With public concerns lingering over COVID-19 infections, the companies expect that such measures will help customers feel safe and relaxed during their trips.

Hato Bus Co., a Tokyo-based leading operator of sightseeing bus tours in the capital, suspended operations on April 8, after the government issued the state of emergency over the outbreak.

The company will resume its tours on June 13, starting with a one-hour route that takes tourists to scenic spots, such as Tokyo Tower and the Rainbow Bridge. Participants can enjoy the view without getting off the bus.

Hato Bus will use open-top vehicles for such tours to show that it is ensuring good ventilation for the passengers and reducing the risk of infections.

The number of tour participants will be halved to ensure proper distancing, and the company will ask them to check their temperatures before boarding and wear face masks during the tours.

Hato Bus on June 8 conducted a test run for the Tokyo tour to check the anti-virus procedures.

Seventeen Hato Bus employees who acted as tourists formed a line at a bus stop in front of JR Tokyo Station, where the test run started. Tour guides asked those who forgot to bring face masks to buy them at a nearby kiosk.

Hato Bus will operate six bus tours a day for the time being, less than 10 percent of the number of its weekend tours a year earlier.

The company is considering limiting the tour to residents of Tokyo. It plans to expand the availability to residents of neighboring prefectures and offer other types of tours depending on the central government’s moves to ease its requests for travel restrictions.

“I became more eager to see customers back on our tours again,” said bus driver Koji Suzuki, 51, who took the wheel during the test run.

Minami Fujiwara, 23, who served as a tour guide during the test run, had been sidelined for two months with the business shutdown.

“It may take a while before people become willing to go sightseeing again, but I want to welcome customers by taking thorough measures (against infections),” Fujiwara said.

Universal Studios Japan (USJ) in Osaka reopened on June 8 but only to annual passport holders living in Osaka Prefecture.

The theme park operator said the number of guests is below 20 percent of the level seen on a normal busy day.

Guests are asked to wear face masks and have their body temperatures taken upon entering the park.

USJ also said it is planning to reopen in phases. It will allow all residents of six prefectures in the Kansai region to enter the park starting from June 19, and will gradually increase the number of guests while preventing overcrowding.

“We are receiving more new reservations than cancellations this month,” said a public relations official of JAL Pack Co. “Many reservations are for tours held between July and August, and Okinawa Prefecture as well as Amami Oshima and Yakushima islands are popular destinations.”

Those working in the tourism industry have high hopes that demand for travel will sharply rebound with the kick-off of the government’s “Go To Campaign.” Under this stimulus measure, government subsidies will cover about half the amount of domestic travel expenses.

Extra attention to safety is being paid to travel agencies’ packaged group tours, which tend to feature the so-called 3Cs: confined, crowded and close-contact settings.

Guidelines released in May by the Japan Association of Travel Agents called on travel agencies to arrange itineraries to reduce the risk of the 3Cs.

Measures listed in the guidelines include: having guides use receivers to show participants around sightseeing spots; entering a facility in small groups and in intervals; staggering meal times and reducing the number of seats to ensure a proper distance between participants; providing written explanations of the meals instead of oral presentations; and serving bento box lunches to participants of a group tour.

Nippon Travel Agency Co. and Club Tourism International Inc. said they have set their own guidelines and are now developing package tours in which participants can feel safe.

(This article was written by Naoyuki Takahashi and Keiko Nannichi.)