Foreign residents in Osaka get helping hand during outbreak 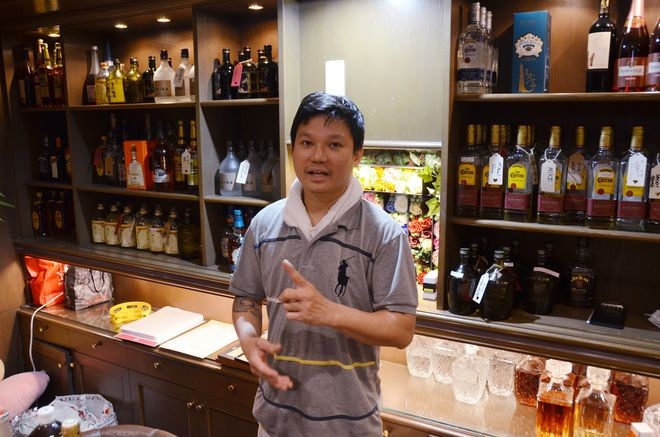 Helbert Saique stands at a counter in a Filipino pub that had been temporarily closed due to the coronavirus pandemic on May 11. (Taro Tamaki)

For Helbert Saique, the owner of an underground Filipino pub in the bar district of Osaka's Minami area, the coronavirus outbreak turned his dream into a nightmare.

He was forced to close his restaurant at the end of April and also temporarily shut his bar down.

“Customers have not really shown up since March. It’s really challenging,” said Saique, 43, who came to Japan from Manila 15 years ago.

Saique has not had any income coming in recently to support his wife, who works with him, and their six children, ranging from a 1 year old to junior high school age.

He had closed its doors since mid-April until the end of May after the Osaka prefectural government urged business owners to temporarily suspend operations.

Saique closed his other restaurant for good at the end of April, which he opened nine years ago after working as a waiter at Minami. The restaurant was his dream come true.

“I cannot escape from this reality because I still have to send my children to school. I just need to pull myself together,” said Saique.

But one phone call he received came as a lifesaver.

The caller was Kim Kwang-min, 48, the head of Minami Kids School, a children's support center, based in Minami, where Saique’s children occasionally study Japanese.

Kim urged Saique to apply for a loan program offered by the council of social welfare in which he could take out a 10-year interest-free loan of up to 600,000 yen.

“I’m not sure where I would be without Kim’s support,” said Saique.

HELP FOR FOREIGN RESIDENTS IN JAPAN

Saique's plight shows the difficulty facing foreign residents in Japan. Even applying for the special government 100,000 yen cash handout to all residents is virtually impossible for a foreigner who is not proficient in Japanese.

In the Minami area, where many foreigners work at restaurants, locals such as Kim have been helping those in need of assistance.

Kim's support center for children is located in the Shimanouchi district where foreign residents account for 33 percent of the total 6,000 residents. At the facility, around 30 students with foreign roots including those from China and the Philippines are taught Japanese and can get assistance for their school assignments from volunteers.

Kim’s motivation to offer the support stems from the fact that he is a third-generation ethnic Korean resident in Japan.

“Children unable to have hope for their futures overlapped with my childhood when I was a junior high school student," he said.

Including Saique, Kim recommended the loan program to 11 households in total, many of whom are headed by single mothers and work at eating establishments in Minami.

“Their current situation is unprecedentedly difficult. Parents whose Japanese ability is insufficient have so many obstacles in seeking public support,” said Kim.

At the end of May, Kim held a tutorial session on how to apply for the 100,000-yen cash payout for foreign residents and some 300 people showed up in two days.

The support center opened a year after a single mother with one child from the Philippines tried to commit suicide in Shimanouchi eight years ago. The mother said she was struggling with trying to juggle between raising her child and working.

The support center has been closed since late February due to the coronavirus but staffers who have teaching licenses continue holding online study sessions for junior and senior high school students three times a week.

A 17-year-old high school student with Thai roots attends each session through her smartphone. With her father hospitalized since May last year, her life has not been easy. She also said she feels nervous about her upcoming university entrance exam.

“It’s reassuring that I get to study with friends and supportive staff at a set time,” the teen said.

For those who are financially unstable such as the high school girl and Saique, a food delivery service offers help.

Shima Room, a makeshift eatery for children in Shimanouchi, has been delivering more than 70 bento boxed lunches to some 25 households three to four times a week since February. The demand for deliveries doubled during the time the Osaka governor asked business owners to suspend their operations.

One of the Shima Room staffers there is Kenichi Naka, 59, who runs a bar in the Higashi-Shinsaibashi district. Naka said some restaurant owners who learned of the service donated bento for the effort.

His favorite part of the service is when he hands out the boxed lunches to children and talks with them at the entrance.

He said he sometimes sees children living in a room filled with clutter and is concerned about the change in their lifestyles amid the coronavirus pandemic.

“I would like to support children growing up in Minami as one of the residents,” said Naka.

Officials have been receiving inquiries from foreign residents since the outbreak of the coronavirus. In Toyohashi, Aichi Prefecture, where some 9,000 Brazilians reside, 308 inquiries were made in April, which was four times higher than in March.

The most common inquiry by residents was how to apply for the special government cash handouts. Many who had lost their jobs at manufacturing companies also sought help from local governments.

The Osaka International House Foundation, which fields inquiries in six languages, has received about 750 inquiries asking about support systems during the coronavirus outbreak since February.

“Many (foreign workers) have been affected by the coronavirus as employment conditions are unstable and they don’t have a friend or relative they can seek support from,” said Sachi Takaya, an associate professor of immigration studies at Osaka University, who is also the director of a nonprofit organization that supports foreigners.