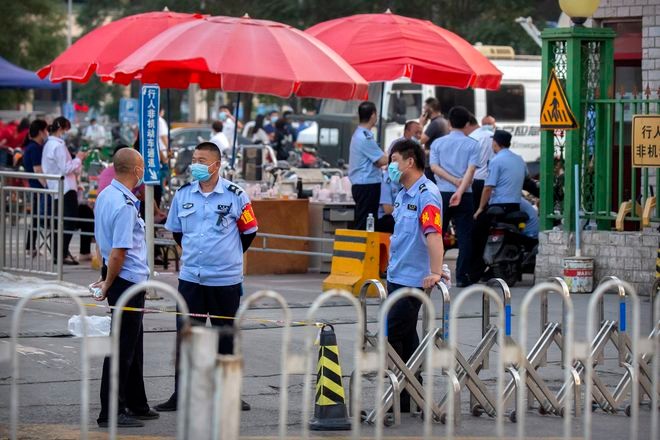 Chinese police stand outside the entrance to a building holding a beef and lamb market in Beijing that was closed by authorities after it was visited by a person who tested positive for COVID-19 on June 12. (AP Photo)

BEIJING--Beijing closed the city’s largest wholesale food market Saturday after the discovery of seven cases of the new coronavirus in the previous two days.

The Xinfadi market, which has 4,000 tenants, will be disinfected after workers tested positive and the virus was found in the environment, the official Xinhua News Agency said.

The National Health Commission said that six new cases were confirmed in Beijing on Friday. Another case was reported Thursday. They are the first locally transmitted cases in the Chinese capital in more than 50 days.

Attention focused on the market after the discovery of the first three cases. Two of the infected people had been to the market, and the third worked with one of them at a meat research institute, according to Chinese media reports.

City officials said late Friday that all the workers were being tested for the coronavirus. They also ordered the testing of food and environmental samples from all the city’s wholesale food markets.

A sign outside one market building Friday read, “This building is urgently closed.” Police and guards restricted entry to the parking area. Workers, many in red market jackets and caps, could be seen standing in line outdoors as buses pulled in.

Authorities are moving quickly to stem a new outbreak. They have delayed the planned reopening of school on Monday for first to third graders in primary school and suspended sports events.

The National Health Commission said that five imported cases were reported elsewhere in China in the last 24 hours, bringing the daily total to 11 and the nationwide cumulative total to 83,075. The death toll remained unchanged at 4,634.

SEOUL: South Korea has reported 49 new cases of COVID-19, most of them in the densely populated Seoul metropolitan area, where health authorities have been struggling to slow transmissions linked to entertainment and leisure activities, church gatherings and low-income workers who couldn’t afford to stay home. The figures released by the Korea Centers for Disease Control and Prevention on Saturday brought national totals to 12,051 cases and 277 deaths. The KCDC said 44 of the new cases were reported from the greater capital area, which is home to half of the country’s 51 million people. KCDC Director Jung Eun-kyeong has pleaded with residents to stay home over the weekend, saying there was “high concern” that increased public activity would lead to a massive circulation of the virus.

HONG KONG'S OCEAN PARK REOPENS: Hong Kong's amusement Ocean Park reopened after more than four months amid virus fears. Measures to guard against COVID-19 include limiting its capacity to 9,000 guests per day for the first two weeks. The park requests all guests to wear a mask and undergo temperature checks before entering. Hand sanitizers were also distributed. The animal and nature-themed attraction combines pandas, penguins, roller coasters and other rides, and has been a Hong Kong icon since 1977. Even before the pandemic, Ocean Park was on the slide, begging the government for more money to survive. At the end of May, lawmakers agreed to give it 5.4 billion Hong Kong dollars ($7 million) to stay afloat for a year.