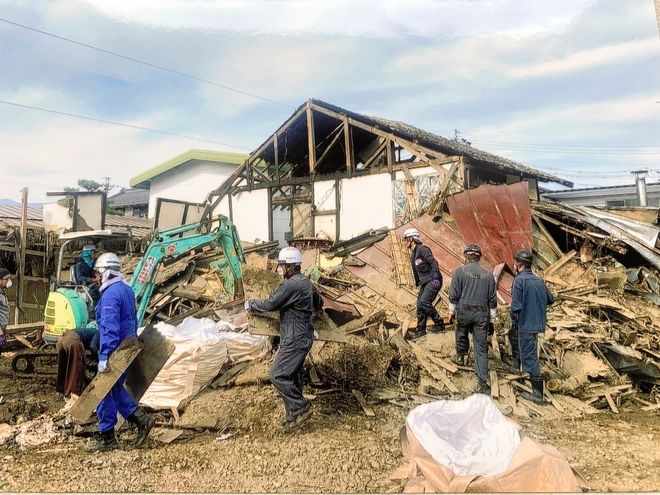 NAGANO--Taisuke Ogawa, the fourth-generation proprietor of a business here that produced what many people regard as the nation's best miso, felt he had lost everything after a powerful typhoon swept through the area last October and destroyed his stock and storage facilities.

Ogawa, 64, found his fermentation storehouse washed away after the banks of the Chikumagawa river collapsed, along with every last dollop of fermenting miso, all 4 tons of it.

But with the help of the prefectural government after the disaster, he managed to extract yeast and other microorganisms from samples that had been submitted to a competition before the typhoon hit to reclaim his standing as producer of the nation's tastiest miso.

Ogawa heads Ogawa Jozojo, a business started by his great-grandfather, in the city's Tsuno district.

Seventy first-year students from the city-run Nagano Junior High School in the city's Tokuma district got together to sow seeds of Nakasennari, a soybean variety grown in the Shinshu region, in a 3,000-square-meter field near the miso producer on June 9.

"It would be a dreadful shame to lose Japan's best miso," said Shiori Miyazawa, 12. "I hope we can keep the miso and help increase the amount."

The students learned how to produce miso during a class held June 5 as part of their integrated studies.

"They learn about local industries and the feelings of people," said Hirotaka Aoki, 45, head teacher of the grade. "I hope they also research fermentation techniques and other topics (to increase their knowledge)."

Ogawa used soybeans cultivated in the region to produce miso paste fermented with yeast and lactic acid bacteria unique to the storehouse. His products gained a reputation for their profound flavor, and the company shipped 30 percent of its total production to the greater Tokyo metropolitan area.

When the typhoon hit the region last Oct. 12, Ogawa managed to spirit his family to safety before he started on desperate efforts to save his precious miso pastes from being inundated with water.

Working in the storehouse, he placed basic ingredients and other items on platforms. By late in the evening, there was serious flooding in the neighborhood, and Ogawa assumed that the nearby Chikumagawa river had overflowed its banks.

Worried about his safety, Ogawa stopped working and evacuated to the second floor of his home on the company premises.

Several hours later, shortly before 4 a.m., a torrent of mud and water surged toward his house with an almighty roar. With the riverbanks collapsing just 200 or so meters away, all Ogawa could do was to stand rooted to the spot and pray for the best.

When he looked around outside his house in the morning, the one-story storehouse was no more, and the barrels and tanks containing bacteria, soybeans, rice, salt and about 4 tons of miso in all--that had been fermenting since spring--were all washed away. The soybean fields were also thick with mud and debris.

Ogawa hit a low point in his life. But 17 days later, he received a call notifying him that his "Gokujo Jidaizu Miso" product had won the top award in a national miso contest held in the name of the farm minister. He had entered the miso for competition five days prior to the disaster.

It occurred to Ogawa that he might still be able to retrieve the microorganisms he had used for fermentation from the award-winning miso.

About one month later, a container with 500 grams of the miso shipped from Tokyo arrived. He then approached the Nagano Prefecture General Industrial Technology Center for advice on how to proceed.

The center was only too eager to help preserve the sophisticated techniques for production of Shinshu miso, according to researcher Atsushi Saito.

Work began on cultivating yeast and lactic acid bacteria taken from the miso in Petri dishes, and in March this year, the microorganisms were finally isolated.

All Ogawa needs next are soybeans and a fermentation storehouse.

"We are still a long way from recovery," said Mika Iijima, president of Colabo, a nonprofit organization specializing in food education. "This miso can help the areas affected by the disaster."

Colabo, the prefectural cooperative association for miso manufacturers and three other organizations helped to kickstart the revival project. The members plan to mount a crowdfunding campaign to raise funds to rebuild the storehouse and cover other expenses.

They have also pledged to help Ogawa sow soybean seeds and cultivate the crops, as well as assist in the miso fermentation process.

"I appreciate all the help that so many people have given me because it is difficult to do it all alone," Ogawa said. "I want to rebuild the storehouse as soon as possible and produce the same miso as before."