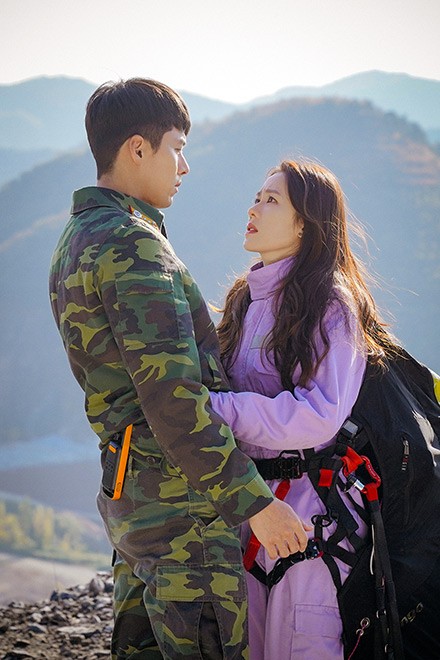 I have little knowledge about the Korean language, but when I exchanged toasts on a business trip to Seoul, I said, “geonbae,” having learned the local equivalent of “cheers” by ear.

In North Korea, some apparently say “chieupsida,” according to a scene from a South Korean TV drama in which homemakers in a remote village cheerfully drink canned beer with dried cod on the side.

“Crash Landing on You,” which has created a buzz, tells the story of a woman from a wealthy South Korean family who crash-lands in North Korea in a paragliding accident.

I initially thought of it as an absurd romance, but I found myself glued to the screen as it depicted the lives of North Koreans to an intriguing extent.

According to a colleague stationed in Seoul, the production team interviewed many defectors from North Korea to ensure accuracy in depicting everyday life in the reclusive country.

In the drama, a North Korean woman falls into rapture when she gets her hands on South Korean cosmetics. Villagers hawking goods crowd a train when it stops due to a power outage.

North Korean authorities, apparently infuriated by such descriptions, denounced the drama as “an extremely fraudulent anti-North drama filled with falsehoods and fabrications.”

The drama piqued my interest in North Korean lives and inspired me to watch a YouTube video titled “Ordinary North Korean Family.”

The North Korean video shows a house furnished with leather-upholstered sofas and a supermarket stocked with a rich assortment of goods.

Obvious government propaganda aimed at showcasing a comfortable life, the video gives no real sense of how “ordinary” people live in the country.
June 15 is a special date in the history of the Korean Peninsula.

On this day two decades ago, the leaders of the two Koreas pledged a peaceful unification in a joint statement. However, no notable progress has since been made toward reconciliation, and the prospects for unification are as bleak as ever.

In “Crash Landing on You,” the heroine tells the North Korean military officer who saved her life before she leaves the country: “I can even go to Africa or the South Pole, but you are here (North Korea), of all places.”

The two neighboring countries remain far apart. I wonder if they will become intoxicated with a dream of unification again someday.