GOHAN LAB/ Spicy and sweet horse mackerel: Refreshing dish will help you make it through the hot summer 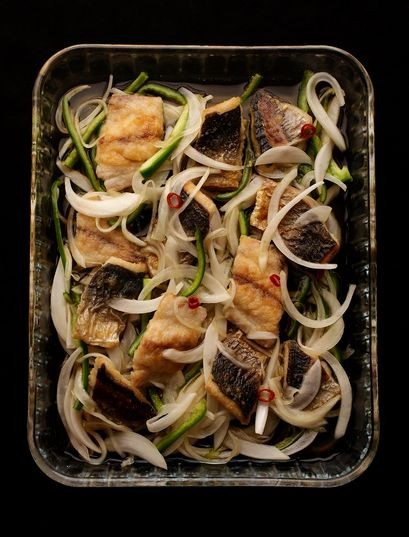 The third installment in our series on simple yet creative ways to enjoy familiar fish focuses on cooking the now in-season horse mackerel “nanbanzuke” style, where the cooked fish is marinated.

It is based on a Mediterranean dish where deep-fried fish or meat is marinated in sweetened vinegar with chili pepper. This variation is not at all troublesome or time consuming.

Since it takes time to deep-fry a whole fish and you may worry about bones, we will be pan-frying fish fillets instead of deep-frying an entire one.

The steps are simple. In fact, there are just three steps: preparing the sweet vinegar sauce, cutting the vegetables, and frying and marinating the horse mackerel.

As was the case for the breaded and pan-fried sardines in the previous installment in our series, horse mackerel should be cooked slowly over low heat. After a while, you will begin to smell a savory aroma.

By cooking thoroughly, until the meat feels hard, the fish will turn out nice in texture. You can then fully enjoy a fragrant horse mackerel that is light, yet full of flavor. The refreshing vinegar taste also invites you to eat more vegetables. This dish will help you get through the summer in good shape.

POPULARITY OF FISH CHANGES OVER TIME

Although fish had been consumed more than meat for ages, the reverse is now true. According to national statistics, the consumption of seafood was overtaken by meat in fiscal 2011. In fiscal 2018, fish consumption fell to about 60 percent of its peak in fiscal 2001.

Over time, types of fish popular for cooking at home have changed. The top five in 1989 were squid, shrimp, tuna, horse mackerel and Pacific saury (“sanma”). But in 2019, they were salmon, tuna, Japanese amberjack (“buri”), shrimp and squid. Though it is less popular now, horse mackerel is still a hot item. It came in eighth, after skipjack tuna (“katsuo”) and mackerel.

Touching on the recent popularity of salmon, a government white paper on fisheries offers this analysis: “As the number of two-income families increases and the time spent on cooking is reduced, salmon that are mainly sold as fillets or sashimi cater to the demand.”

3. Slice off ribs from fillets with kitchen knife (PHOTO A) and cut each fillet into three equal parts. Press fish with kitchen paper to absorb water, sprinkle a bit of salt. Have flour ready in container, thinly dust both sides of fish using hands.

4. Warm oil in frying pan and lay fish skin-side down. Cook for 1 to 2 minutes over low heat (PHOTO B). When pieces start to brown, turn and cook for another 2 minutes. Marinate fish in vinegar sauce (PHOTO C). Flavor will settle down after about 30 minutes. Dish will keep in fridge for 2 to 3 days.

Akiko Watanabe is a cooking expert specializing in Japanese cuisine.
Midori Kasai is a professor at Ochanomizu University and chairwoman of the Japan Society of Cookery Science.

The two types of flour, “hakurikiko” (weak flour) and “kyorikiko” (strong flour) are made from wheat containing different amounts of protein. When kyorikiko, with a higher protein content, is kneaded with water, a larger amount of gluten with adhesive and elastic properties is formed, making it suitable for making bread. Hakurikiko, which forms less gluten, is better suited for making confectionery. When used to dust fish to be fried, the fish turns out moist when hakurikiko is used, and crisp when kyorikiko is used.