Koike plays down surge in new COVID-19 cases in Tokyo 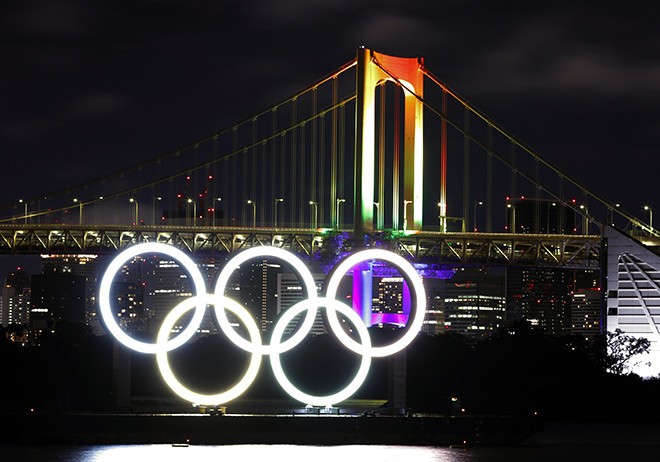 Tokyo’s Rainbow Bridge is illuminated in rainbow colors on June 11 after the metropolitan government lifted the “Tokyo alert” calling for increased vigilance against a surge in new coronavirus cases. (Ryo Ikeda)

Tokyo Governor Yuriko Koike dismissed criticism that she had prematurely lifted the “alert” for COVID-19 infections after the number of new cases continued to surge in the capital.

On June 14, 47 infections were confirmed in Tokyo, the first time the daily number has surpassed 40 since May 5, when 57 new cases were registered.

Koike played down the June 14 increase in new infections.

“The figure is the outcome of aggressive testing and is vastly different from numbers reported before,” she said after holding a closed-door meeting with Yasutoshi Nishimura, minister in charge of central government’s measures to fight the pandemic, and Shinjuku Ward Mayor Kenichi Yoshizumi.

Koike said the metropolitan government will continue to closely monitor the trajectory on infections and establish a working group on June 15 to formulate a set of steps to combat a possible second wave of COVID-19.

The “Tokyo alert” calling for increased vigilance against novel coronavirus infections was lifted on June 11, nine days after it was issued.

Even then, some within the metropolitan government said the ending of the alert was too early.

Doubts over the decision are heightening now that the number of new cases is rising and showing no signs of abating.

The Tokyo alert was issued on June 2 based on numerical guidelines, such as the daily average of new infections reaching 20 or more over a week and the ratio of new cases whose routes of transmission is unknown surpassing 50 percent of the total.

After the daily number of new cases fell into the single digits, the alert was lifted on June 11, although 22 new cases were reported that day, topping 20 for the first time in five days.

In line with the lifting of the alert, Tokyo officials withdrew their requests for businesses to shut down in almost all industries.

But the number of daily new infections has topped 20 each day since the alert was lifted.

Of the 47 new cases on June 14, 18 were detected at a host club in the Kabukicho red-light district of Shinjuku Ward, where a cluster infection has been reported.

The 18 were confirmed infected after broader testing was conducted at the establishment following the outbreak there, according to Tokyo officials. But almost all of them were asymptomatic, they added.

Aside the 18, 14 new cases were linked to a night club and similar venues.

Nishimura also played down the rise in new COVID-19 cases in the capital.

“Efforts have been under way to prevent a secondary wave of infections,” he said. “We want to take a positive approach to the matter.”

(This article was written by Rihito Karbue and Dai Nagata.)