Abe: COVID-19 vaccine may be available around end of the year 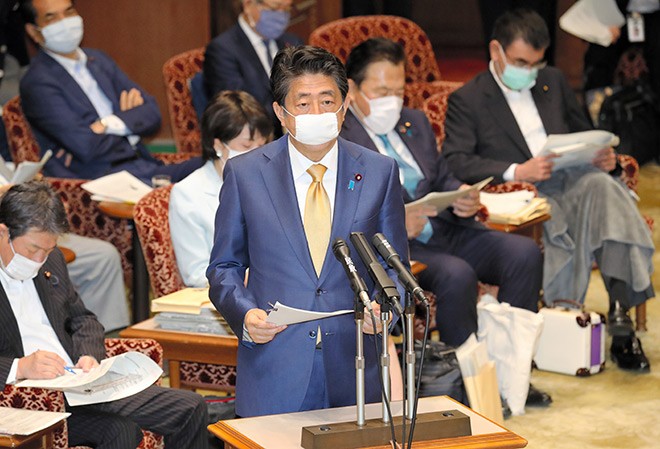 A vaccine against COVID-19 being developed by U.S. biotech firm Moderna Inc. may become available in Japan around the end of this year if development proceeds smoothly, according to Prime Minister Shinzo Abe.

Appearing in an online program aired June 14, Abe revealed that the government is negotiating with Moderna and AstraZeneca PLC, a British-based pharmaceutical giant, to ensure that Japan can secure a sufficient supply of vaccines once production is in full swing.

Abe, referring to a possible second wave of new coronavirus cases, noted that infections are spreading even in Qatar and other Middle Eastern countries, where temperatures are very high.

"We cannot let our guard down even when summer starts (in Japan),” he said.

Abe also mentioned a contact tracing app the health ministry is developing. The smartphone app logs contact with other users using Bluetooth technology and alerts those who have come in close contact with infected users.

“The development (of the app) entered the final stage and is set to be released by the end of this week,” he said. “The participation from as many people as possible (into using the app) and mutual cooperation will help prevent the virus from spreading at an early stage.”

Abe also referred to concerns raised about the flow of government funding for a subsidy program that provides up to 2 million yen ($18,700) to struggling small and midsize companies hit by the pandemic.

An organization commissioned by the government to handle paperwork for the program was paid 76.9 billion yen for the work, but outsourced the job for 74.9 billion yen, raising questions about the propriety of the decision to pocket 2 billion yen from the program.

“One company handling all the work does not necessarily bolster efficiency nor does it lower the cost,” Abe said. “I would like to clarify once again that the government will not make payments unless the actual cost arises.”