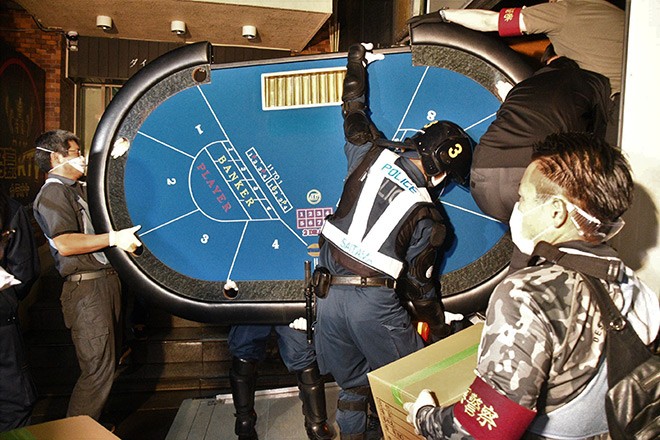 It is the latest in a recent string of police raids cracking down on illegal gambling nationwide amid the novel coronavirus pandemic.

Police arrested Tomohiro Hanaya, 50, the manager of the gaming facility Circus, located on the fifth floor of a building near JR Nishi-Kawaguchi Station, as well as his 12 employees, on suspicion of holding baccarat games with customers where they played for money.

Baccarat is a card game played between two hands--“the player” and “banker”--in which customers bet on which side will total closest to nine.

One customer told police they had intended to make some money after losing their job during the novel coronavirus outbreak.

The casino was operating 24/7 for at least a year, police said. It took in around 10 customers in a typical day--even after the government issued a state of emergency.

Police are investigating into whether the shop’s revenue has been flowing to organized crime.

COVID-19 A BOON TO ILLEGAL GAMBLING

“There is a possibility that people who usually play pachinko or horse racing started going to illegal gambling facilities due to the coronavirus pandemic,” said Mari Takahashi, a lawyer and expert on illegal gambling.

In May, Aichi prefectural police arrested 23 workers and customers at a casino in Nagoya on suspicion of illegal gambling. One of the people arrested told police they had to turn to gambling after being temporarily laid off from their job because of the coronavirus.

After being arrested, the head of an illegal gambling facility in Tokyo told police that they kept their shop open because the coronavirus pandemic has been good for business.

According to a survey conducted by the Society Concerned about the Gambling Addiction in early May, 93 out of 216 people with gambling addictions said they felt anxious about the coronavirus situation. On top of that, 151 said they would gamble to seek relief, should people be required to refrain from going out or to temporarily close their businesses before receiving addiction treatment.

Noriko Tanaka, the head of the association, said the coronavirus pandemic has triggered many stressors--such as staying home and being laid off--that make people with gambling addictions feel jittery and want to gamble.

“Effective face-to-face treatments have been difficult to conduct because of the coronavirus so the number of patients might be increasing,” Tanaka said. “We should see this as a problem that could happen to anyone and it is important to understand that risk.”

According to research conducted by the health ministry in 2017, it is estimated that around 3.2 million people are suspected to have been addicted to gambling in Japan.

(This story was reported by Keita Yamaguchi, Ryohei Miyawaki and Takara Yoshioka.)