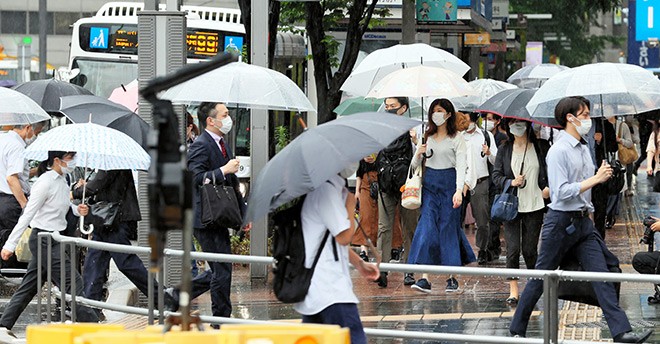 Pedestrians out in the rain in Fukuoka’s Hakata Ward on June 11, about four weeks after Fukuoka Prefecture was freed from state of emergency restrictions over the new coronavirus (Jun Kaneko)

Crowds around major train stations in 39 prefectures where the state of emergency was lifted about a month ago are back to roughly 80 percent of pre-COVID-19 health crisis levels.

But in Tokyo and seven other prefectures that were freed from the restrictions later, numbers range from 50 percent to 70 percent, compared with the period prior to the outbreak of the pandemic.

Crowd sizes were estimated by The Asahi Shimbun based on data collected from location information of smartphones issued by Agoop Corp., a Softbank Corp. subsidiary.

The estimated number of people before a key train station in each prefecture between 3 p.m. and 4 p.m. on June 12 was compared with the daily average number of people on weekdays between Jan. 18 and Feb. 14., the period that preceded the nationwide pandemic scare.

Authorities on May 14 lifted the state of emergency for the 39 prefectures, including Ehime Prefecture where data on crowds is not available.

As of June 12, the level of congestion in front of the key train stations had returned to more than 80 percent of the pre-health crisis level for 31 prefectures, including Miyagi, Niigata and Kagawa.

The comparable figures for May 12, prior to the lifting, ranged approximately from 40 percent to 80 percent.

The state of emergency for Kyoto, Osaka and Hyogo prefectures was lifted on May 21. For the northernmost main island of Hokkaido, along with Saitama, Chiba, Tokyo and Kanagawa prefectures, the decision took effect on May 25.

On May 12, crowds milling around Tokyo Station in the capital and Umeda Station in Osaka Prefecture were estimated at 31 percent and 25 percent, respectively, compared with the Jan. 18-Feb. 14 period.

But the size of crowds rebounded to 72 percent around Sapporo Station in Hokkaido, 50 percent at Tokyo Station and 64 percent at Umeda Station on June 12.

Tokyo moved toward greater easing of restrictions on commercial activities on June 12, a day after it lifted its alert calling for continued vigilance against a second wave of the infections.

The capital has been forced to perform a delicate balancing act between stemming the contagion and working to stoke the economy battered by the pandemic.

The number of cases dropped to 256 over 29 days through June 12 for the same prefectures, with 25 deaths.

(This story was written by Hisatoshi Kabata and Keiko Sato.)