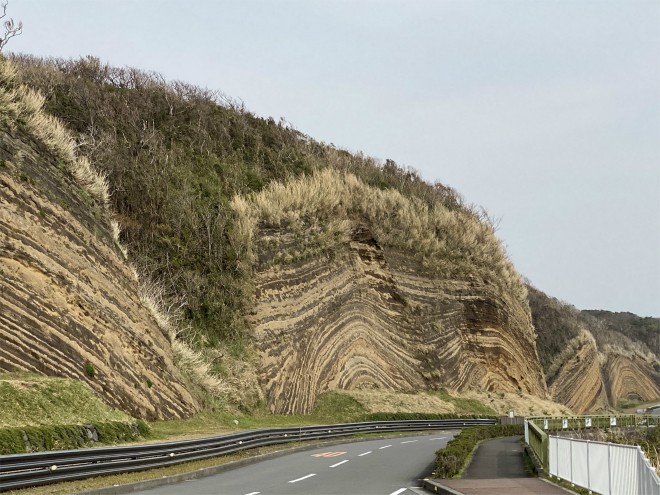 Along the main road at the southwestern side of Izu Oshima island is a stretch of a geological cross section running about 600 meters. It is known as Baumkuchen for its resemblance to the famous German cake. (Photo by Lisa Vogt)

Gazing at the thumbtacked postcard of Big Island, Hawaii, on the corkboard above my desk, I wondered how many islands in Japan are called Oshima, or “big island.”

I consulted my best friend, Wikipedia, and looking at the long list of names, lost count at 50. I then remembered hearing someone mention that cars on Izu Oshima island have Shinagawa plates because the isle is under Tokyo’s jurisdiction. It was with this thought that I decided that Izu Oshima would be my next destination for this column.

A nearly two-hour ride from Takeshiba Pier by a high-speed jet ferry will have you docked at Okada or Motomachi ports, depending on the sea conditions. My ferry arrived at Okada and, having imagined a sleepy country port with not much of anything, I was surprised to see an architecturally stunning modern terminal building reminiscent of a sea creature made of curved concrete lines.

It was designed by Atsushi Matsushita, who also created the Umihotaru Parking Area. The spick-and-span terminal opened last year and doubles as a ferry terminal and volcanic eruption and tsunami evacuation facility.

Many people visit the island from January to March to take part in the Tsubaki Matsuri (the Camelia Festival), which has been going strong since 1956. In August, a big summer festival with concerts, fireworks, and Miss Oshima and Miss Anko contests brings visitors from near and far.

The highlight of my trip was driving along the 630-meter-long seaside German tree cake, often called Baumkuchen. The stratigraphic cross section was revealed in 1953 when workers were constructing the paved road that goes around the island. It’s a perfect and rare specimen that shows the island’s 15,000 years of geological history.

The approximately 90-square-kilometer island is perhaps best known for Mount Mihara, an active volcano that erupted most recently in 1990. Despite almost everything being burned by lava, life finds a way of regenerating itself, and hiking the central cone volcano with its caldera summit, I found myself surrounded by greenery.

On the mountain, I enjoyed a boxed lunch of bekko-sushi, a locally caught whitefish that’s marinated in soy sauce and island chili peppers. Wasabi used to not be available on the island, but peppers are plentiful, so raw fish was traditionally eaten with togarashi-shoyu. I also ate a rice ball wrapped in ashitaba (a quick-growing green leaf that is part of the carrot family). Both were a first for me and absolutely delicious.

(The author visited the island on March 22.)

* * *
This article by Lisa Vogt, a Washington-born and Tokyo-based photographer, originally appeared in the May 3-10 issue of Asahi Weekly. It is part of the series "Lisa’s In and Around Tokyo," which depicts the capital and its surroundings through the perspective of the author, a professor at Meiji University.