Lisa’s In and Around Tokyo: Museum of Ivory and Stone Sculptures offers regal stonework 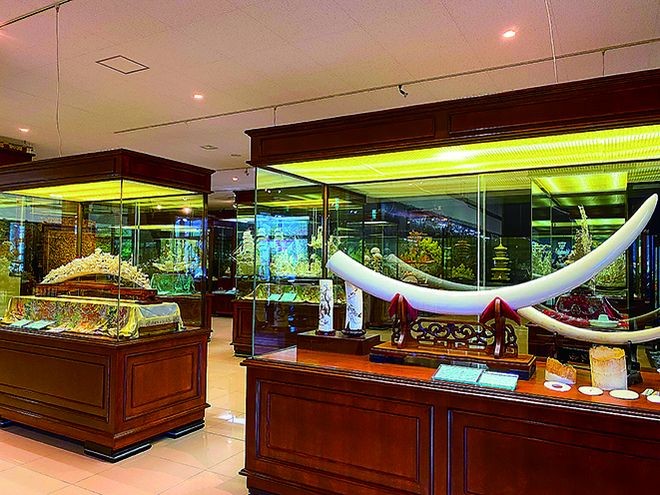 The museum houses about 270 exhibits, including about 120 ivory carvings from China, a jade sculpture, folding screens studded with jewels and artworks from Asia. (Photo by Lisa Vogt)

“The Museum of Ivory and Stone Sculptures in Izu? Oh, umm, well? I guess, OK. Then, uh, I’ll see you there,” I hemmed and hawed at an acquaintance’s suggestion.

I’ve spent time in Africa, so I’m a bit jaded--pun intended. I have witnessed firsthand bloody, mutilated elephant carcasses with their once glorious tusks hacked off. Elephants live in groups, and seeing crying baby elephants mourning is a sight one can never shake off.

On an intellectual level, I do get that poaching is about economics. At the risk of sounding like a stereotypical emotional and self-righteous Western woman waving my finger at those who could do such horrendous things to innocent animals and the unenlightened people who prize ivory, my heart was not into visiting such a museum.

Oh, and it’s not just animals. Don’t get me started about Myanmar’s blood jade.

Long story short: I was blown away and forced to question my assumptions and judgments. The magnificence, scale and grandeur of each museum piece took my breath away. Wow. Our species has the ability to create such culture.

The intricate details, painstaking time, skill and dedication put into it all.

I was surprised--no, shocked--to find such a private collection stashed away in the boonies.

The museum area is divided into several sections.

First, the famous epic “Saiyuuki” (“Journey to the West”), is depicted using 1,500 natural stones on what might be the world’s most massive continuous folding screen.

Second, there is the “Song of Everlasting Regret,” written by Bai Juyi in the year 806, about Youkihi, or Yang Guifei, one of the four famous beauties of ancient China. I couldn’t take my eyes off the many sensual scenes, all graceful and elegant, scattered throughout the 108 folding screens.

To think that each scene was made by cutting, polishing and pasting stones of all colors and shades was jaw-dropping.

Third, there is a collection of ivory carvings consisting of suspended chandeliers, gods, boats, battle scenes, animals, gates and much more. A highlight for me was intricately carved balls within balls, like Russian matryoshka. When you blow into one, the layers inside rotate. To complete one ball, multiple generations work on it for life.

I find many museums to be just a colossal file cabinet. For me, this place was more. I was left pondering many questions. For example, if true art is timeless and entities that breathe are but momentary, what is one to think? One answer does not fit all.

(The museum is open during reduced hours from 10 a.m. to 4 p.m. and closed twice a week on Tuesdays and Thursdays due to the new coronavirus epidemic.)

This article by Lisa Vogt, a Washington-born and Tokyo-based photographer, originally appeared in the June 7 issue of Asahi Weekly. It is part of the series "Lisa’s In and Around Tokyo," which depicts the capital and its surroundings through the perspective of the author, a professor at Meiji University.