Science ministry: In 2040, humans can talk with their pets 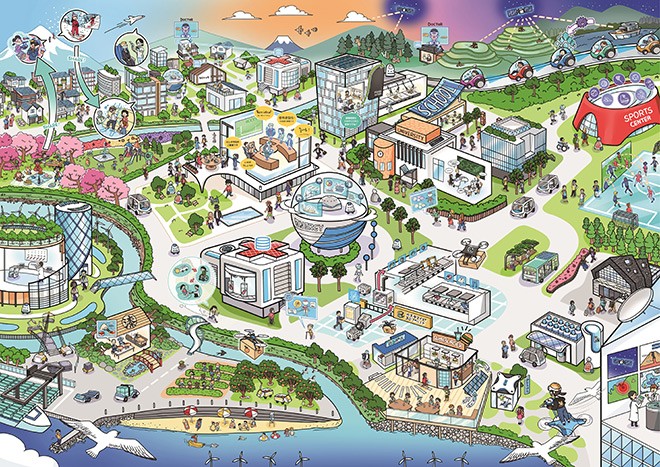 Artist's illustration of life in 2040, predicting a world where reality and virtual reality become far more intermingled (From the science ministry's White Paper on Science and Technology)

In 2040, you'll be able to communicate with your pets and taste what your partner is eating for dinner despite being far away from them, the science and technology ministry is betting.

The predictions are part of the ministry's White Paper on Science and Technology, which the government approved June 16 at a Cabinet meeting.

This year's white paper, which imagines life in 2040, envisions a world where reality and virtual reality become increasingly merged and “society will become flexible through the restoration and reconsideration of humanity.”

About 70 percent of the ministry's predictions have come true since it started regularly issuing the white papers in the 1970s.

In 1977, it predicted televisions that could be hung on the wall. In 1982, the ministry forecast the arrival of mobile phones.

The white paper this year makes 37 predictions about life 20 years from now.

It imagines that by then we will have a shared human consciousness that allows us to do such things as tasting food another person is eating.

It suggests a newfound ability to hold conversations with dogs and cats. People with disabilities could also experience things like skiing through developments in virtual reality gear.

The paper also says that heavy machinery now run by humans at automotive factories and construction sites are likely to be automated.

Robots will grow fruit and vegetables at farms and harvest them, and drones could deliver them to shops and homes.

The science and technology ministry said it plans to reflect the white paper in long-term policies, such as the Basic Plan for Science and Technology.

Nobel Prize laureate Akira Yoshino, an honorary fellow at Asahi Kasei Corp., was a special contributor to the paper.

“Now is a drastically changing time around the world and is the best time for children and young researchers” to solve the environmental problems and achieve a sustainable society, Yoshino said.