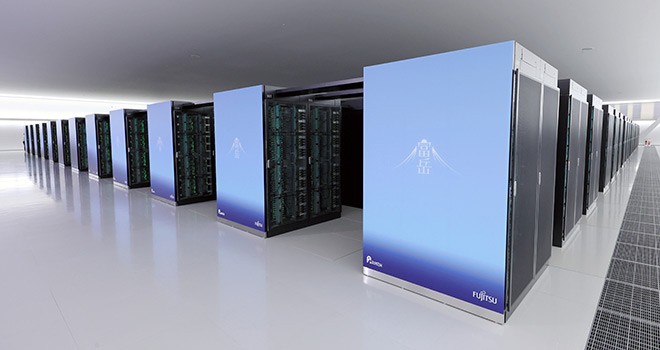 Fugaku, Japan’s new supercomputer that has been used for novel coronavirus studies and is 100 times more powerful than its predecessor, was put on display for the first time on June 16.

Fugaku was jointly developed by Riken, a government-affiliated research institute, and computer maker Fujitsu Ltd. It was set up at the Riken Center for Computational Science in Kobe.

Riken is planning full operations of the supercomputer in fiscal 2021. Fugaku has already been used to calculate the proper height of a partition that can effectively block droplets spewed from the cough of a seated person infected with the novel coronavirus.

Fugaku is the successor to K, which was once the world’s best supercomputer. However, Renho, an Upper House member, dampened Japan’s enthusiasm in the global supercomputer competition by questioning the need for the country to be ranked No. 1 in the world.

The latest supercomputer was named Fugaku--another name for Mount Fuji—because the height of Japan’s tallest peak represents the high capabilities of the machine, and the wide areas of the base of the mountain show that a wide range of people can use it.

Fujitsu made a trial version of Fugaku and entered it in the Green 500 competition last year. It placed No. 1 in the world for energy-efficiency among supercomputers.