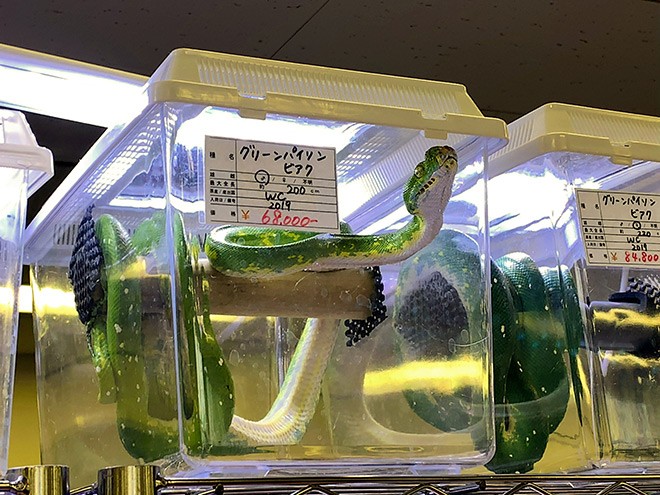 Customs authorities intercepted attempts to smuggle more than 1,100 specimens of wild animals into Japan from Southeast Asia and elsewhere over a 12-year period through 2018, a report shows.

The fact-finding survey on pet animals smuggled into Japan, the first of its kind, was conducted by Traffic, an international nongovernmental organization working on trade in wild animals and plants.

Reptiles such as turtles and snakes accounted for 71 percent of the haul, followed by primates and other mammals at 19 percent and birds at 6 percent, according to the group's report released on June 11.

Primates, bats and other species whose trade is banned under the Infectious Disease Law were also seized.

Numerous cases have been reported globally of imported rare animals being kept as exotic pets.

Japan is seen as a particularly large market, but the realities of illegal trade remain unclear.

Traffic studied cases of seizures by customs authorities of species protected under the Washington Convention and brought into Japan without proper permission. It learned that a total of 78 seizures involving 1,161 specimens were made between 2007 and 2018.

Reptiles topped the list of species intercepted by the authorities, with 827 seizures. Many cases involved four-eyed turtles and other turtle species. Chinese crocodile lizards and other lizard species also made the list.

Mammals comprised the second largest group with seizures of 219 specimens. They included 185 primates, such as slow lorises, and 10 bats, imports of which are banned under the Infectious Disease Law.

In reality, though, there is a possibility that these countries and regions might have served as purely points of transit, meaning that the animals could have been brought into Japan from many more countries, the report said.

Traffic believes that the cases of seizures were just the tip of the iceberg.

The group urges consumers to refrain from purchasing pets whose legality and safety cannot be confirmed because smuggled animals might have unknown pathogens.