Let it rot: Ainu totem pole left to decay according to artist’s wishes 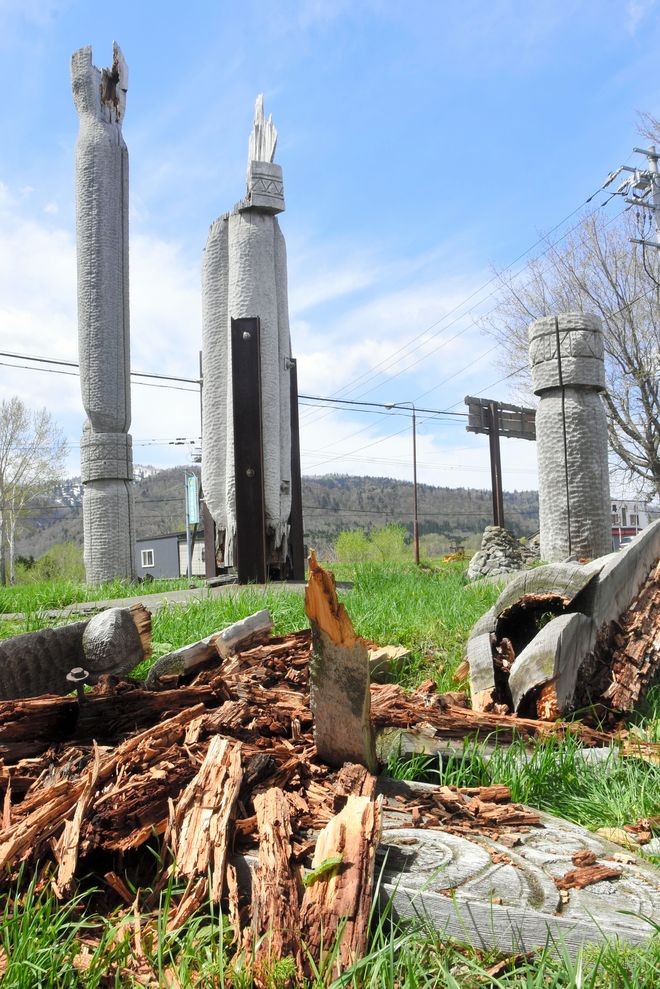 The bottom part of Ainu sculptor Bikky Sunazawa's “Fukuro” (Owl) totem pole still stands, but most of the artwork, including its wings, lie scattered around it in Otoineppu, Hokkaido. The piece was damaged in high winds in late April. (Daijiro Honda)

OTOINEPPU, Hokkaido--“Fukuro” (Owl), a 6-meter-high totem pole created by the renowned late contemporary Ainu sculptor Bikky Sunazawa, was toppled by winds here in late April and left to decay where it fell.

And that's exactly how the artist would have liked it, as he dictated that his work be left to the mercy of nature.

The prolific sculptor, painter and graphic artist born with the first name of Hisao gained world renown for his woodcarvings in the style of the Ainu indigenous people of Hokkaido and the Russian Far East, to which he added his own modern twists.

Among his major works was a design for the Ainu flag. Two years before his death from bone marrow cancer in 1989 at age 57, the artist was awarded the rare honor of having a small planet named after him by two amateur astronomers from Hokkaido.

Fukuro, erected as part of a trio totem poles Sunazawa titled “Shiko no Tori” (Birds of Thought) created in 1981, was knocked over on the evening of April 21.

The names of people who assisted Sunazawa in its creation are carved into the back of its outstretched wings. They have also been left where they fell after detaching from the Sakhalin spruce sculpture.

Only an area up to a height of 1.7 meters or so from the totem pole’s base escaped damage.

The two other Shiko no Tori totem poles that made up the trio and stood in front of the office of Hokkaido University’s Nakagawa Experimental Forest in Otoineppu village had already taken a beating prior to the strong winds.

“Ezoshika” (Indigenous Hokkaido shika deer), which was initially about 11 meters tall and stood in the middle of the three, collapsed in 2004.

Part of the face of “Kitsutsuki” (Woodpecker) toppled in 2011, and its wings dropped off in 2015. The remaining poles of both artworks remain intact and still stand in their original spots minus their appendages.

Sunazawa, who was born in 1931 and raised in Hokkaido’s Asahikawa city, earned the nickname “Bikky,” which means “frog” in Ainu language, as a child.

He moved to the shore of Lake Akanko when he was 22 and started creating woodcarvings at a souvenir shop. He then began visiting Kamakura, the ancient capital in Kanagawa Prefecture, during winter and interacted with other artists, including the novelist Tatsuhiko Shibusawa.

Sunazawa’s work started gaining traction in art circles after his woodcarvings were displayed in exhibitions, including one held by the Modern Art Association.

In 1978 at age 47, he relocated his base from Sapporo to Otoineppu and opened his own atelier at a closed elementary school there, where he formed a deep friendship with researchers at Hokkaido University in the village through sake drinking sessions.

The camaraderie led Sunazawa to create the Shiko no Tori totem poles in front of the office.

The wood for the totem poles was cut from the Nakagawa Experimental Forest, managed by the university, where Sunazawa personally selected the trees for his works.

Makoto Kawakami, 82, who ran a lumber business in the village and was a close friend, recalled the time they made a mountain trek in the forest and one monarch birch tree caught Sunazawa’s eye.

“This wood isn’t strong against rain and wind,” Kawakami told him. But Sunazawa insisted on that particular tree to create Ezoshika, the centerpiece of the three Shiko no Tori totem poles.

The Shiko no Tori totem poles were not the first works Sunazawa created with the condition that they be allowed to naturally decay outdoors. In 1986, his four huge wooden sculptures called “Yottsu no Kaze” (Four Winds) were erected on the premises of Sapporo Art Museum in Sapporo.

“Nature uses the chisels called wind and snow on the work standing here,” Sunazawa said in a message read out when the four sculptures were put up.

His wishes were realized as three of the four wooden sculptures later fell over. The remaining sculpture is the last piece of Sunazawa’s work exhibited outdoors that remains almost intact since the collapse of the Fukuro totem pole, according to the museum and Sunazawa’s widow, Ryoko.

Sunazawa created the Yottsu no Kaze sculptures in 1986 at his Otoineppu atelier, where he carved other famous works, including “Kami no Shita” (Tongue of God), made of Japanese oak said to weigh 7 tons, “TOH” (Tower), a vertical tower-like sculpture, “Juka” (Wooden Flower), a lump of tangled willow tree branches, and numerous other works made of wood.

The Fukuro totem pole, including its scattered, shattered pieces, will be left untouched for the time being, said the office of Hokkaido University’s Nakagawa Experimental Forest.

At some point, the office said it will consider returning what is left of the totem pole to the forest, where it was logged, because there are records that show the exact location.

“Collapse, decay and return to the soil are also part of Sunazawa’s artwork,” Kawakami said. “His creation lasts forever.”