Sapporo Snow Festival to scale down sculptures due to COVID-19 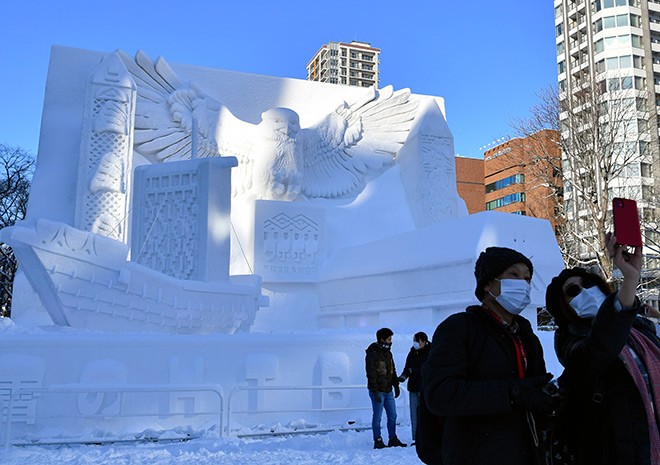 Visitors eager to attend the annual Sapporo Snow Festival next year will not be able to see the iconic, towering snow sculptures that often rise higher than 10 meters.

Organizers announced June 16 that both the festival and the sculptures will be scaled down due to concerns about the coronavirus pandemic.

They came to that decision because it proved difficult to obtain the cooperation from companies that would serve as sponsors for the huge sculptures.

Also, travel restrictions due to the health crisis have made it impossible for them to arrange overseas study tours that are necessary to produce such large ice sculptures.

Had they delayed making the tough call, organizers said it would have placed a heavy burden on those involved with the festival.

“We will return to the basics of our snow festival and focus on small to midsize snow sculptures made by citizens,” a representative said.

Some of the staff of this year's festival have even contracted the coronavirus. The duratin of next year’s festival will be carefully considered, and organizers are looking into instituting infection-prevention measures.

Since 1950, the annual festival has been held between late January and mid-February, mainly at Sapporo Odori Park.

The gigantic snow sculptures gained popularity for their wide variety of unique shapes and subject matter, ranging from movie characters to world-famous buildings and temples.

The festival attracts more than 2 million visitors from both in and outside of Japan.

It recently started a projection mapping event, where images are projected onto large snow sculptures.

(This article was written by Fumiko Yoshigaki and Toru Saito.)