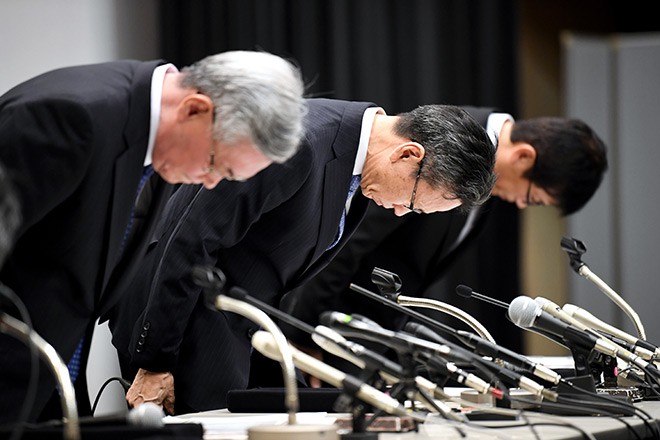 Makoto Yagi, left, Shigeki Iwane, second from left, and another official with Kansai Electric Power Co. bow in apology at a news conference in Osaka on Oct. 9 after a scandal erupted over their taking cash and other gifts from a former deputy mayor of Takahama, Fukui Prefecture. (Asahi Shimbun file photo)

The legal action followed revelations that 75 former and current Kansai Electric officials, including those sued, had received cash and other gifts totaling 360 million yen from Eiji Moriyama, a deputy mayor of the town of Takahama, Fukui Prefecture, since 1987.

Moriyama, who died in March 2019, cooperated with the utility when it constructed two nuclear reactors at its Takahama nuclear plant in Takahama.

Kansai Electric had awarded orders for nuclear power-related projects to companies based on Moriyama’s requests after he retired from the Takahama town hall.

The lawsuit said the failure by the five executives to fully exercise management oversight caused the company to lose potential orders from local governments that had shut out Kansai Electric from bidding on their public works projects.

Kansai Electric said it will likely increase the size of the damages sought because the company has not determined the entire scope of losses caused by providing favors to Moriyama in the form of awarding projects linked with him.

Ichiro Matsui, the mayor of Osaka, which is the largest shareholder of Kansai Electric, welcomed the legal action against the former top officials.

“It is a positive step to stick the knife into Kansai Electric introverted corporate culture,” Matsui said June 16.