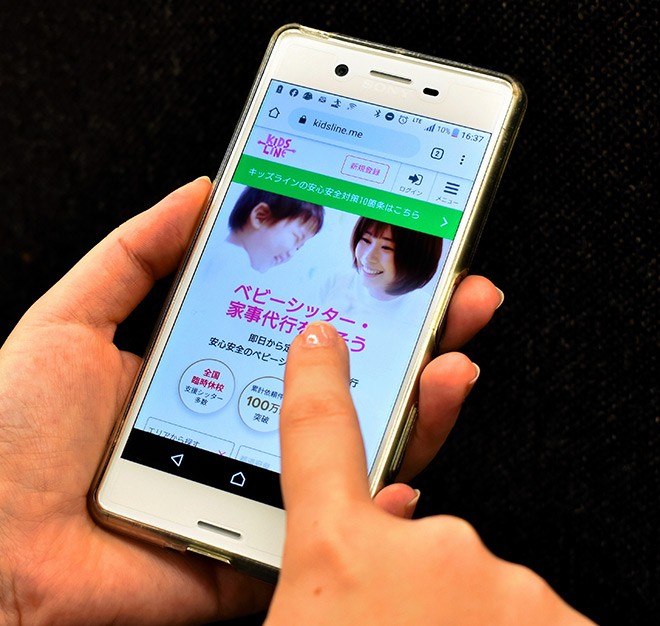 The website of a babysitter placement agency (Sachi Matsumoto)

Male babysitters were taken off the books of a leading babysitter placement service agency after a series of shocking predatory pedophile incidents took place while parents were away from their children.

The decision was met by a torrent of criticism that it fans prejudice against male sitters and nursery teachers.

But the more shocking fact is that agencies and parents have no effective means to track down pedophiles and sexual offenders.

Kidsline, a web-based babysitter placement service operated by Kidsline Inc., on June 4 announced it would temporarily suspend taking requests for a male sitter.

In April, a 29-year-old man of no fixed address was arrested on suspicion of carnal abuse while caring for a minor.

The man, who was registered with the agency, was sent to an apartment in Tokyo to babysit a boy in November 2019. There, he touched lower part of the boy’s body, police said.

The man was rearrested over a forced sexual act and other allegations of a sexual nature on June 10. Police said he was assigned to babysit a boy in Tokyo and sexually assaulted him during the period from September to November in 2019.

On June 12, a 30-year-old male babysitter registered with the agency was arrested on suspicion of committing carnal abuse against a minor. Police said the man touched a girl’s lower body while babysitting her at her home in Tokyo.

As of June 4, when the agency announced the suspension of placements of male babysitters, about 4,500 candidates were registered with the company.

Male sitters account for about 2.5 percent of the total people registered, the agency said. A number of them were bitter about the decision.

The agency is trying to figure out a way to allow certain male babysitters to continue working with the consent of parents.

But some male sitters and parents, too, still felt aggrieved.

“I can’t accept that,” said a 32-year-old male sitter who was registered with the agency and worked six days a week, mainly in Tokyo.

“I interact earnestly with children face-to-face, and it has nothing to do with gender,” he said. “Before suspending the reservation system, there are things that the agency could have done, like reviewing the job interview and training session processes.”

A Tokyo woman in her 30s who has used the babysitter service for several years was unhappy about the absence of an explanation from the agency after the pedophile cases were made public.

“The problem is not limited to the families who have used male sitters. As long as we use the same system, the agency should make more efforts to inform parents,” the woman said.

In his view, the agency should have first fully shared the information with users and then worked to improve the process of registration and management of babysitters.

Yamaguchi also maintained the decision was discriminatory “because it presumes male babysitters are likely to commit a sex crime based solely on the fact that they are male, the same gender as the suspects.”

“It deprives male babysitters of their security of profession,” he added.

Kidsline explained that “experts have pointed out that sex crimes are more likely to be committed by men.”

“It was a difficult decision," the agency said in a statement. "But once a crime occurs, it will cause permanent damage to a child. We decided to prioritize safety.”

Hiroki Fukui, a psychiatrist who heads Sex Offenders Medical Center, estimates that 5 percent of people in Japan have pedophile tendencies and they are predominantly male.

Still, only a few act on their urges and commit a crime, Fukui said.

Kidsline’s decision to shut out male babysitters will not fundamentally solve the problem, Fukui said, because a predator is likely to register with other agencies to sexually abuse children.

The real problem appears to lie in a lack of a public and effective criminal background check system to screen out babysitters and nursery teachers who are likely to commit a sex crime.

Government regulations require babysitters to be certified as a nursery teacher or nurse, or to complete a certain number of classes and exercises.

Both suspects were certified as nursery teachers, according to Kidsline.

But the process of ensuring such a person is no longer registered as a nursery teacher relies on the individual in question to make a report.

In some cases, it requires local government officials to attend a trial to assess the situation.

In the past, officials failed to disqualify a nursery teacher with a criminal record.

Mika Ikemoto, a chief researcher at the Japan Research Institute Ltd., advocates setting up a new background check system like one operated in Britain, where a national organization conducts a background check using a database. Nursery teacher applicants are required to ask the organization to issue a certificate and submit it to a potential employer.

The database keeps track of criminal as well as employment records, which determine if an applicant is deemed to be inappropriate in the company of children or who has been fired in the past.

Since October 2019, early childhood education and childcare have been free in Japan. Babysitting is also part of that policy.

“We need a system that screens out inappropriate people so as to protect nursery teachers and babysitters who work earnestly,” Ikemoto said.

(This article was written by Maiko Ito, Haruka Takashige and Natsumi Nakai.)