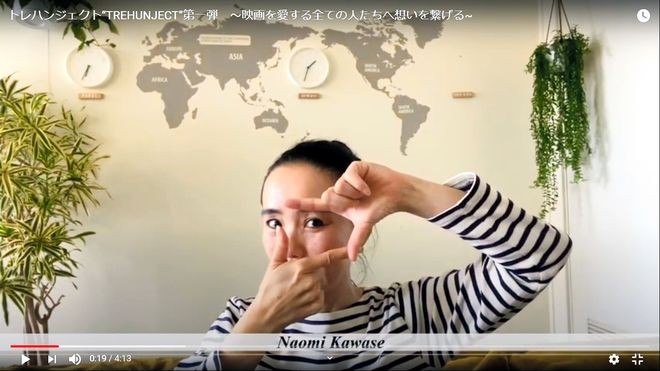 Director Naomi Kawase, who appears in "Trehunject" (From YouTube)

NARA--Three short videos featuring filmmakers and actors introducing their "treasures" have been released by the executive committee of the biennial Nara International Film Festival (NIFF).

The project is titled "Trehunject," an abbreviation of "treasure hunting project."

A total of 11 directors and actors associated with the Nara film festival appear in the four-minute first installment.

They include director Naomi Kawase, who also serves as executive director for the NIFF; actress Kaori Momoi, who starred in a special project for the festival; and actor Masatoshi Nagase, who has served as a jury for the NIFF.

They introduce what they value most when it comes to making films. The video includes footage of a travel destination, a pet and a child.

They say "I love cinema" at the end of their turn before the next person takes over. Each appears for about 20 seconds.

The videos were compiled from clips sent to the executive committee from about 50 filmmakers from home and abroad introducing their treasures.

"We hope it helps motivate viewers to reflect on what matters to them amid the coronavirus pandemic," a representative said.

In addition to the "Trehunject" videos, a short film titled "3.11 A Sense of Home Films" was also published online for the first time. It was produced at the initiative of Kawase after the Great East Japan Earthquake and tsunami in March 2011, putting together short films made by about 20 directors from around the world into one anthology.

They include South Korean director Bong Joon-ho, whose "Parasite" won the Oscar for best picture and other major Academy Awards, and Spanish director Victor Erice.