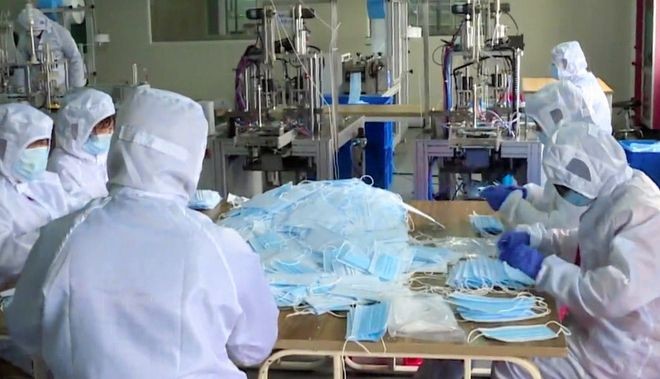 JIAXING, China--One of the world’s hottest commodities and a potential life-saver rolled steadily off an assembly line here, waiting for inspection by workers in masks and aprons.

Their factory is located in an industrial complex of Jiaxing in Zhejiang province, one of the most important areas in the battle against the novel coronavirus pandemic.

The province is China’s largest production center for face masks in terms of value, according to data compiled by Chinese authorities for the three-month period through March.

The country had produced nearly 70 percent of face masks distributed to the Japanese market before the novel coronavirus pandemic struck.

But the supply of masks from China dried up when many countries scrambled to procure them as the contagion spread within their borders.

Facial masks have now returned to store shelves in Japan. And Chinese manufacturers have heightened production to ensure a stable supply in the coming months.

The Jiaxing factory, near Shanghai, produces masks for the U.S. and Japanese markets. The factory’s manager said operations have been in full swing to meet the frenzy of orders that keep coming in.

“Demand is heightening globally,” the manager, 51, said. “We will need to operate even on weekends.”

The workforce at the factory was expanded to respond to the explosion in demand.

The factory used to manufacture not only masks but also air fresheners, gloves and other items. One of its main clients was an operator of a U.S. supermarket chain.

But the factory changed all production lines to make masks following outbreaks of the new coronavirus in January.

Initially, the masks were intended for the Chinese market after Wuhan, the epicenter of the outbreak in China, was locked down.

After the country flattened the curve in late February, the factory shifted to exports.

The manager said it introduced three assembly lines, each costing 200,000 yuan (3 million yen or $27,800), to ramp up production and catch up with mounting orders from Japan and the United States.

Its production capacity shot up to 3 million to 3.5 million face masks per week from around 200,000 annually.

The race to acquire materials for masks has also intensified, particularly for melt-blown fabric used as filters, the most essential part of the mask.

Prices of quality materials that boast a high ratio of blocking airborne droplets soared to 50 times the regular price.

Still, the factory manager said mask-making is sufficiently profitable, given the enormous number of orders that have flooded in.

The factory shipped 4 million masks to Japan in May and expects to send out a similar volume in June.

With more masks circulating in the Japanese market, the exorbitant prices seen on the internet have disappeared.

Local media in China reported that the prices of melt-blown masks with an interception rate of 90 percent or lower for the virus have fallen to pre-pandemic levels.

However, the manager appeared confident that his factory will not be affected by the declining prices.

“We are proud of the high quality of our products, which guarantee that at least 95 percent of viruses will be blocked,” he said. “So, a price collapse should not be a concern.”

With the Japanese market becoming saturated, the manager said he is considering shifting the export focus to the United States, which has struggled to contain the spread of the virus.
During the steep demand for masks, a variety of companies in China tried to cash in.

Chinese automaker BYD Co., for example, churned out 20 million masks a day, one of the largest production capacities in the world.

But with so many players crowding the market, an excess in supply followed, as well as complaints about quality.

The Chinese government announced that by the end of April, it had detected 90 million masks of questionable quality.

Importing countries filed grievances over substandard masks from China, so authorities in Beijing have moved to ban exports of products failing to clear domestic and overseas standards.