U.S. military personnel test positive for virus at Misawa base 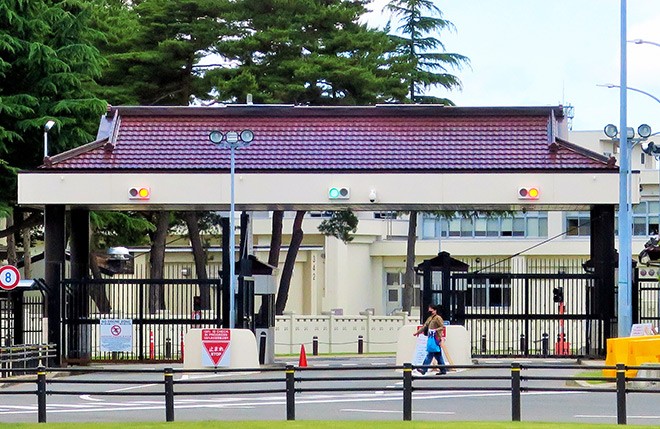 A pedestrian walks past an entry gate at the U.S. Forces’ Misawa Air Base, where personnel were placed under a shelter-in-place order due to newly discovered COVID-19 cases on June 17 in Misawa, Aomori Prefecture. (Kuratoshi Yokoyama)

Kristopher Struve, the base's commander, told Misawa city’s infectious disease task force at a committee meeting that the base would temporarily restrict movement of its personnel to maintain the safety of the base and the local area.

The base did not officially reveal how many unit members contracted the virus, prompting it to issue a shelter-in-place order. But according to sources, three members of a “transient” unit that traveled from the United States and arrived at the base on the evening of June 15 tested positive for the virus.

The unit members were placed in isolation at the Misawa base and tested on June 16, after officials learned about new coronavirus cases discovered in their unit back in the United States. The test results came back positive the next day.

Since they had used some of the base’s facilities, it is working on identifying anyone that came in close contact with them.

Multiple base personnel have already taken a polymerase chain reaction (PCR) test to check whether they have contracted the coronavirus.

Struve said everyone with access to the base was instructed to remain in their quarters and was restricted from leaving.

The Japan Air Self-Defense Force’s Misawa Air Base shares some of the facilities at the U.S. base.

ASDF officials instructed all personnel at Misawa Air Base to refrain from going out for nonessential purposes.

According to the city government, about 8,000 people related to the U.S. base reside in Misawa. About 3,000 people affiliated with the ASDF live in the city, as well as 1,400 or so base employees.

City officials said they assessed the situation and determined the risk of an outbreak among locals is low because the unit members infected with the virus have stayed inside the base.

“We have a good relationship with the base, and I believe they will notify us immediately if there is a new development,” said Misawa Mayor Yoshinori Kohiyama.

Still, he urged residents to be vigilant.

“Use hand sanitizer and wear a mask. Please keep calm and do not worry too much,” he said.

According to Aomori prefectural government officials, the base notified the prefectural emergency services office about the COVID-19 cases early in the morning on June 17.

They were told the base posted information about the newly discovered cases on its official Facebook page.

The Aomori prefectural government requested more information through its Kamitosan public health center, which has jurisdiction over Misawa. But the base had yet to provide details as of the evening, prefectural officials said.

Following the central government’s standards, a prefectural government does not count a person who tested positive for COVID-19 as its own if he or she is military personnel staying inside a base.

In Aomori, no new COVID-19 cases have been reported since May 7.

The prefectural government is expected to seek more information and discuss how to count this case, after first assessing the effects on residents.

(This article was written by Kuratoshi Yokoyama and Yoshinori Hayashi.)