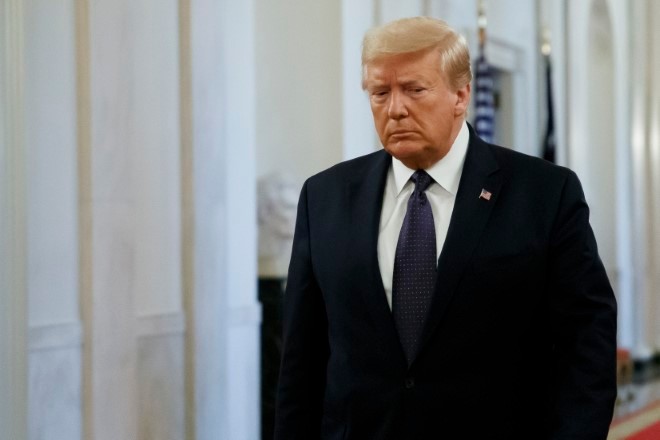 U.S. President Donald Trump arrives to speak about the PREVENTS “President’s Roadmap to Empower Veterans and End a National Tragedy of Suicide,” task force, in the East Room of the White House, on June 17 in Washington. (AP Photo)

At a summit in Japan in 2019, with only interpreters present, Xi gave Trump an explanation for the Chinese camps for Uighurs, who are ethnically and culturally distinct from the country’s majority Han population and are suspected of harboring separatist tendencies, Bolton wrote.

“According to our interpreter, Trump said that Xi should go ahead with building the camps, which he thought was exactly the right thing to do,” the book said.

That would be a stunning statement coming from the president of the United States, where the First Amendment protects the right to religious beliefs and practices and prevents the government from creating or favoring a religion. It could drive a wedge between Trump and his Republican China hawks on Capitol Hill.

It also could take some punch out of the Trump campaign’s efforts to portray former Vice President Joe Biden as soft on China. The Trump campaign released an online video last month that included clips of Biden previously describing that country as “not bad folks” and saying economic growth there was in the U.S. interest.

The Associated Press obtained an advance copy of Bolton’s book on Wednesday. It was the same day that Trump signed legislation that increases pressure on China over its crackdown in Xinjiang, where authorities have detained more than a million people--from ethnic groups that include Uighurs, Kazakhs and Kyrgyz--in a vast network of detention centers. Many have been subjected to torture and forced labor and deprived of adequate food and medical treatment.

The law imposes sanctions on specific Chinese officials, such as the Communist Party official who oversees government policy in Xinjiang. In his signing statement, Trump took issue with one sanctions provision, saying it intruded on executive authority and he would regard it as non-binding.

Trump’s alleged comment to Xi was at odds with Secretary of State Mike Pompeo’s statement last week condemning China’s treatment of the Uighurs.

“In China, state-sponsored repression against all religions continues to intensify,” Pompeo said in releasing the department’s latest annual International Religious Freedom report. “The Chinese Communist Party is now ordering religious organizations to obey CCP leadership and infuse communist dogma into their teachings and practice of their faith. The mass detentions of Uighurs in Xinjiang continues.”

It also contradicts the position of lawmakers who have taken hard-line positions against Beijing.

Republican Senator Jim Risch of Idaho, chairman of the Senate Foreign Relations Committee, said “the internment of at least a million Uyghurs and other Muslim minorities is reprehensible and inexcusable, and the Chinese Communist Party and government must be held to account.”

Senator Marco Rubio, a Republican from Florida, said the legislation was evidence that the United States supports the Uighurs and “will not sit idly by as the Chinese government and communist party commit egregious human rights abuses and crimes against humanity.”

Nihad Awad, director of the Council on American-Islamic Relations, a Washington-based Muslim civil rights and advocacy group, said he thought it was ironic that Trump signed the legislation on the same day that details of Bolton’s book became public.

The bill was expected to further inflame already tense relations between the United States and China amid the Trump administration’s criticism of Beijing’s response to the outbreak of the coronavirus.

Trump issued a statement upon signing the legislation that the new law would hold “perpetrators of human rights violations” accountable.

The law requires the U.S. government to report to Congress on violations of human rights in Xinjiang as well as China’s acquisition of technology used for mass detention and surveillance. It also requires American authorities to look into the pervasive reports of harassment and threats of Uighurs and other Chinese nationals in the United States.

Senator Jeff Merkley, a co-sponsor of the legislation, said the act requires the secretary of state to determine whether individuals responsible for “appalling human rights violations” meet the criteria for sanctions. “The United States cannot remain silent in the face of these atrocious and horrifying abuses,” the Oregon Democrat said. “As millions of Americans fight for racial justice here at home, we must also stand strong as a champion of human rights abroad.”