1,000-year-old festival to ward off plague given modern revamp 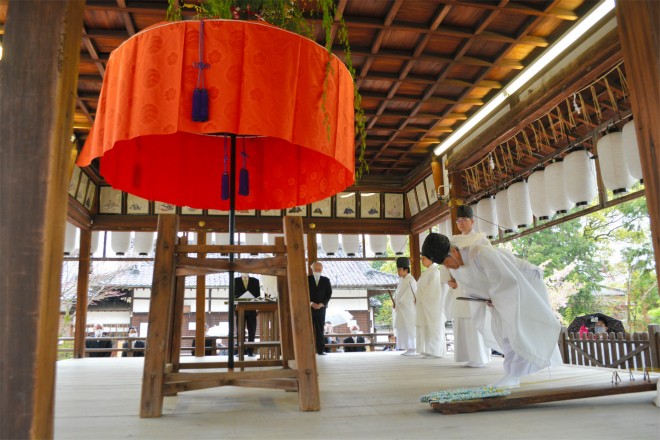 The Yasurai festival is held at the main hall of Imamiyajinja shrine and other parts of Kyoto’s Kita Ward on April 12 to pray for an end to the new coronavirus pandemic. This year, the main event, a procession, was scrapped due to fears about spreading COVID-19. (Yoshito Watari)

KYOTO--Japan, ever able to adapt to life's vicissitudes, has a festival it seems for every occasion, even one to rid the nation of the scourge of the new coronavirus pandemic.

In this case, a festival held April 12 with roots going back 1,000-plus years when plague was part and parcel of existence, was reconfigured to pray for an end to the health crisis that swept Japan and has claimed nearly 1,000 lives to date.

The Yasurai Matsuri event, one of three peculiar annual festivals in this old capital, was held at Imamiyajinja shrine after a state of emergency was declared for Tokyo, Osaka and five other prefectures because of the COVID-19 outbreak.

The highlight of the festival is a grand parade by regular patrons of the shrine. They wind through city streets attired to resemble traditional demons and swirl umbrellas adorned with flowers to gather deities believed to spread epidemics.

But this year, the procession was omitted due to what Japanese refer to as the “three Cs" environment characterized by closed and crowded places with close-contact settings.

At one point, organizers considered canceling the entire festival, but in the end decided to go ahead with the core ritual portion of the celebration with some fine-tuning, such as replacing a song with a performance featuring a koto stringed instrument.

“Our hope of terminating the pandemic is the same, though some elements of the festival were revised,” said Yorihisa Sasaki, chief priest of Imamiyajinja shrine.

“Thinking about what to do under these challenging circumstances may help preserve the thoughts passed down by people over the centuries,” Sasaki added.

The origin of the festival lies in a long-established practice known as “chinkasai,” where divinities of sickness are appeased to coincide with the season of spring blossoms falling.

This form of religious service, like many others, survived to the modern era in an urban setting along with the famous Gion Festival, which is said to date from a “goryoe” ritual to pray for people’s health held in 869.

Heiankyo, the ancient capital in present-day Kyoto that literally means “peaceful capital,” was anything but a safe place during the Heian Period (794-1185).

Infectious diseases were rampant in the crowded city, so the authorities introduced a festival to raise awareness about the dangers that epidemics posed. A feast was later incorporated into the event by local citizens for economic reasons.

Japan’s official record of the time, called “Nihon Sandai Jitsuroku,” notes that the capital was hit by plague on many occasions in the latter half of the ninth century. A huge number of children died of dysentery in 861, and many fatalities were later reported as a result of an influenza outbreak.

These disasters were blamed on the bad karma of Prince Sawara (750-785), who was suspected to have planned an assassination, and with five others, succumbed to an untimely death. This prompted the imperial government in 863 to organize the first goryoe at the Shinsenen garden south of the “daidairi” palace area to stop the illness from spreading.

“The occasion was aimed at consoling the souls of people accused on false charges of rebellion and other crimes to prevent them from becoming plague deities by entertaining them with Buddhist sutra chants, votive offerings and amusing performances,” said Masahiro Nishimoto, a professor of Japan’s ancient history at Kansai University.

While there are no records on goryoe being held for a number of years after the first event, residents revived the ritual in the late 10th century when widespread sickness struck again.

A smallpox epidemic in 994 was described in “Honcho Seiki,” a chronology of events in those days, as resulting in corpses everywhere and the sides of roads infested with sick individuals.

A rumor circulated that the god of illness roamed roads in and out of the city, prompting ordinary citizens as well as aristocrats to bolt the gates and doors of their homes, leaving the streets deserted.

Toru Yagi, a folklore professor at Bukkyo University in Kyoto, compared the historic incident with fears today about the spread of the new coronavirus.

“This can be called a model of today’s stay-at-home campaign,” Yagi said. “People in the Heian Period did not have the expertise that we do, but they might have instinctively understood what to do to contain the spread of infectious disease.”

In those days, the goryoe ritual was held atop Mount Funaokayama in Kyoto, but the plague deity, not individuals, was venerated.

Records show that the plague deity was transported in a portable shrine so it could be driven out to the sea in what is now Osaka.

“For the public, it might have been difficult to figure out the significance of praying for the souls of unknown individuals from olden days,” Yagi said.

He noted that people waged a daily fight against sickness and death and prayed for the god of sickness, a deity from the outer world, to be driven out of the capital.

After a new epidemic broke out several years later, a similar session was staged at Murasakino in present-day Kyoto near Funaokayama, and the shrine now called Imamiyajinja was constructed in the city’s Kita Ward.

Owing to the financial struggles of the government, goryoe events were consistently organized by local residents in later periods. Goryoe and chinkasai have since been handed down as a way to pray for the continued good health of all.