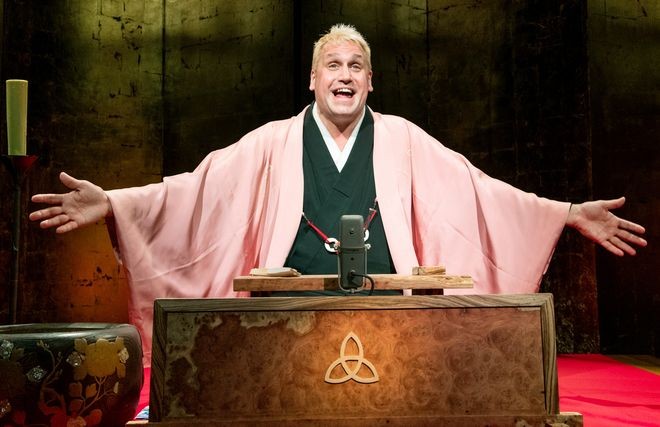 The 50-year-old Canada-born thespian has settled in for a long run at an off-Broadway theater, performing his "Kamigata" (Osaka-style) rakugo show in English.

The show is currently on hiatus due to the coronavirus pandemic, but Sunshine has managed to captivate Western audiences with the traditional Japanese form of comedy.

"Everyone bursts into laughter, even without explanation," Sunshine said.

He made his off-Broadway debut in September last year, performing twice a day, two days a week, at a theater with a capacity of 350. To make his entrance flashy, he even added hip-hop beats to "debayashi," a short piece of instrumental music played when performers come on stage.

Winning the hearts of New Yorkers, the initial three-month run was extended to September this year.

Sunshine was nominated for Best Unique Theatrical Experience at the 10th Off-Broadway Alliance Awards. Although he did not clinch the award when the winners were announced on May 20, he was glad to be considered on par with other off-Broadway shows.

"I never thought I'd be nominated," Sunshine said. "I'm beyond happy to see rakugo being recognized at this level."

Sunshine came to Japan in 1999. He was previously a playwright in Canada, before he became interested in Japanese traditional performing arts.

Working as an amateur rakugo storyteller, Sunshine made strenuous efforts to create his original comic stories and perform rakugo at the graduate school of Osaka University of Arts.

He was so impressed with original rakugo stories performed by Bunshi (then Sanshi) at the Tenman Tenjin Hanjotei vaudeville theater in Osaka, he decided to become his apprentice in 2008. The storyteller has been performing rakugo in English in venues outside Japan, holding a North American tour in 2013.

"I want to be good enough to be invited by theaters across the world. Broadway is not a goal but a step to achieve that," Sunshine said.

He intends to promote rakugo to the world as an established form of entertainment in show business.