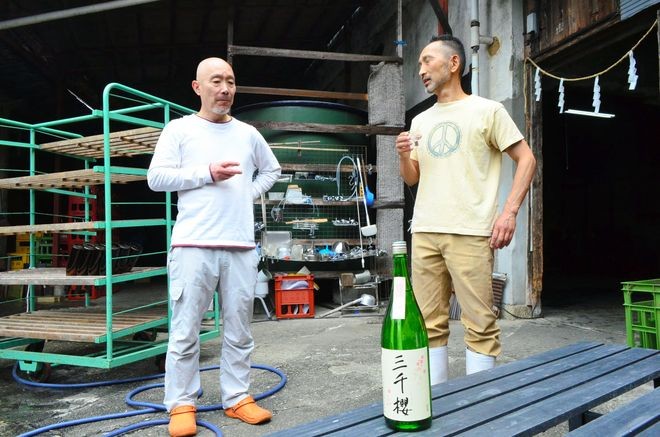 NAKATSUGAWA, Gifu Prefecture--A sake brewery that has been operating here for nearly 150 years is relocating north to Hokkaido due in part to global warming.

Although the Michizakura Shuzo brewery also wants to take advantage of a Hokkaido town’s promotional campaign and avoid expensive equipment upgrades, its citing of climate change as a reason for moving is believed to be the first in the industry.

“The colder the weather is, the better the sake quality will become,” said Koji Yamada, 60, president and master brewer of the company.

Michizakura Shuzo, founded in 1877 by Yamada Michisuke, the fourth-generation local community head, will relocate to the town of Higashikawa in Hokkaido in autumn.

The brewery decided to join hands with the northern municipality that was seeking to promote locally brewed sake as its specialty.

Under the plan, a new brewing facility will be built by the town government, while Michizakura Shuzo will be commissioned to operate it for sake production in the rare public-private program.

“This is an endeavor made for the coming 100 years,” Yamada said.

The brewery currently produces about 20,000 1.8-liter bottles of rice wine annually from the locally grown Gohyakumangoku brand rice and spring water on a company-owned mountain.
Seventy percent of its products are shipped to Tokyo and surrounding areas.

The warmer climate has further complicated the situation, particularly for the process of fermentation.

The rice malt and yeasts are easily affected by germs. Only when the ingredients are stored in a room at around 5 degrees for two weeks to a month, the yeasts will proliferate appropriately to improve the quality of the completed sake.

If the temperatures increase significantly, problems will arise, such as faster fermentation, according to Michizakura Shuzo officials.

Yamada, the fifth head of Michizakura Shuzo, had been looking to overcome the challenges since around three years ago.

He recalled thinking at the time: “To continue producing sake in the next 100 years, we should relocate the brewery instead of investing extra funds in refurbishing the equipment.”

He then heard about Higashikawa’s plan to install a brewing facility.

With a population of 8,300 and situated at the center of Hokkaido, Higashikawa can be reached in 20 minutes by car from Asahikawa Airport.

Although it thrives in rice farming thanks to affluent snowmelt runoffs from the Daisetsuzan mountain range, the municipality does not have well-known local specialties.

It decided to use its quality water and rice to create a new sake brand, but the town did not own a brewery or have the know-how for sake production.

Higashikawa decided to set up a production facility first and then invite brewers. It would be a new form of sake production in which a commissioned agent would brew rice wine at the publicly installed site.

Yamada, who visited Higashikawa on many occasions for observations, was impressed by the “excellent quality of rice and water,” and quickly made up his mind to apply for the municipality’s program.

In January, Michizakura Shuzo was chosen as the operator of the new brewery.

According to the Japan Meteorological Agency, the average temperature in Nakatsugawa was 14.0 degrees in 2019, compared with 7.4 degrees in Higashikawa.

Three sake breweries moved locations in 2019. But unlike Michizakura Shuzo, those breweries did not mention climate change.

“I never heard about such a case,” said an official of the Liquor Tax and Industry Division of the National Tax Agency, referring to Michizakura Shuzo’s relocation plan.

Higashikawa started construction of the facility in May. It is scheduled for completion in late October at a cost of 350 million yen.

The building will also be used as a tourist spot, with a tour route and sales section.

Michizakura Shuzo will pay a facility use fee. Yamada and five staff and family members will start work at the new venue in November.

Despite the relocation, Michizakura Shuzo will not change its brand name or production method.

In Gifu Prefecture, brewing preparations last from October through March next year, but Michizakura Shuzo expects to use the September-May period for the process in Higashikawa. The schedule will allow for less-restrictive sake brewing procedures, enabling staff to take days off more easily.

Hokkaido is home to only 12 breweries, and 80 percent of rice wine consumed on Japan’s northernmost main island is reportedly created outside Hokkaido.

Yamada wants to contribute to the local region with high quality sake.

“We will develop young brewers in the local area who will pass down our business, and in 10 years we will make Higashikawa widely known as the town of the Michizakura brand,” he said. “I am looking forward to the quality of sake to be brewed there.”