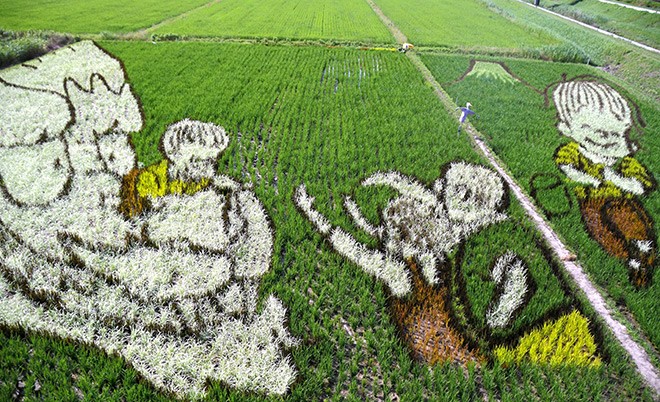 The last scene of a picture book by animator Yuki Omura, who was killed in the July 18, 2019, arson attack on Kyoto Animation Co., appeared in rice fields in Shizuoka Prefecture on June 17. (Kazutaka Toda)

KIKUGAWA, Shizuoka Prefecture--A tribute to animator Yuki Omura, 23, among 36 killed in the arson attack on Kyoto Animation Co., has appeared in a rice field in his mother's hometown, re-creating one of his works across a rice field.

The artwork, which stretches over scores of rice plants, has appeared just a month before the one-year anniversary of the July 18, 2019, mass murder at the animation studio in Kyoto.

Locals said the piece was created to keep the talented animator’s work alive.

“I still cannot find the words to describe the loss of this great aspiring man. I want many people to come out and see this artwork,” said Tadashi Ikeda, 76, the tribute's organizer.

The field was a special spot for Omura, who used to go there with his family to view other artworks done across the paddies.

The artwork is the final scene of a picture book Omura created when he was a university student and shows the story's protagonist united with his parents after returning from an adventure.

The artwork honoring Omura was created by 10 types of rice plants, some of which were planted by the animator's parents.

It will be left on the paddy until Aug. 16, and an observation deck is opened to the public on weekends and holidays. Tribute organizers have constructed the special observation deck so people can view the picture from above.