Local campaigns seek to attract tourists back after curbs lifted 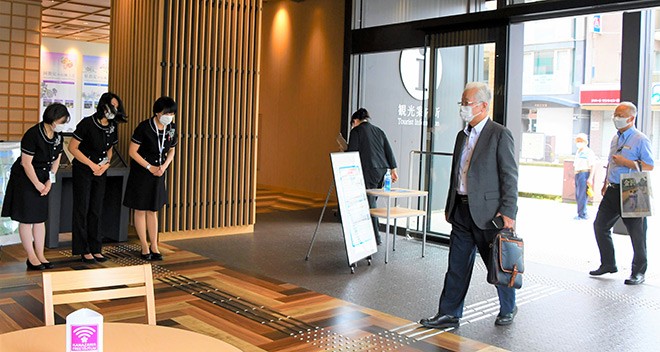 Few people were seen on the streets of the popular Dotonbori entertainment district in central Osaka on the drizzly morning of June 19.

Masaki Oshita, who works at a local outlet of “Honke Ootako,” a long-established “takoyaki” (octopus dumplings) restaurant chain, was standing on the street to draw customers in.

“The travel restrictions were lifted, but I think it will still take some time before tourists return (to this area),” said Oshita, 37.

Local governments across the country have launched tourism promotion campaigns to draw visitors back following the lifting of domestic travel restrictions. However, many local businesses aren't expecting to see as many tourists as they are accustomed to anytime soon.

The central government lifted its nationwide request to refrain from traveling across prefectural borders aimed at preventing the spread of the novel coronavirus on June 19. Many local governments have started promotional campaigns targeting overnight visitors.

The Osaka prefectural and city governments began a campaign on June 19 to give points worth about 2,500 yen ($23) to travelers who stayed in the prefecture. According to the Japan Tourism Agency, the number of overnight visitors to Osaka Prefecture in March plunged by nearly 70 percent from a year earlier.

The Hyogo prefectural government also plans to launch a campaign to provide overnight visitors to the prefecture’s onsen hot spring resorts with vouchers of up to 2,000 yen that can be used at nearby shops to buy souvenirs. The government is expected to issue 450 million yen of vouchers in total.

On June 8, the Ishikawa prefectural government started a program to give local residents subsidies that cover up to half the expenses of their overnight stays at accommodation.

As the government has been flooded with applications for the program, it used up nearly the entire 400-million-yen budget within a week. The government plans to increase the budget, and it also hopes more people will visit Ishikawa from outside the prefecture.

A new tourism information center opened in central Kanazawa on June 19 as well.

Yamashiro Onsen, a hot spring resort in Kaga, Ishikawa Prefecture, welcomed some 720,000 customers in 2019. The resort is known as an oasis for the Kansai region, and 70 to 80 percent of its customers come from other prefectures.

Two onsen ryokan inns run by Hiroyuki Yorozuya, president of a local tourism company, closed temporarily as the number of guests dropped to only a few in May. He decided to reopen one of the inns on June 26 and the other on July 17, but the ryokan are receiving few reservations from residents in metropolitan areas.

“Many people are still refraining from traveling across prefectural borders,” said Yorozuya. “I think the number of travelers will not return to the level (before the pandemic) until the central government’s program to promote tourism kicks off.”