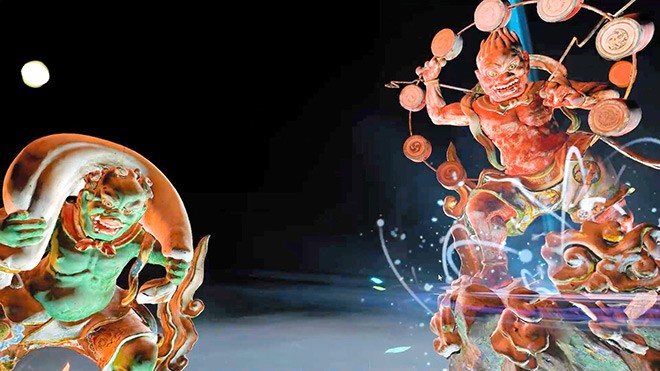 The 13-minute video shows images of the temple's principal deity, the Senju Kannon, or the thousand-armed Kannon Bodhisattva, and other statues housed in its Kannondo Hall.

They include Fujin (god of wind) and Raijin (god of thunder); a pair of guardians of Buddha named Agyo and Ungyo; and Shitenno (four heavenly kings) called Zochoten, Jikokuten, Tamonten and Komokuten.

Visitors to the World Heritage site are normally only allowed to view the statues from a short distance away during the monthly Kannonkai event.

"We hope as many people as possible can learn about the charms of the Buddhist statues in the Kannondo Hall through the VR footage," said Shoyu Yoshida, head of the temple's administrative office.

Some of the statues, including Fujin and Raijin, can be seen not only from the front but also from the sides and back. It allows viewers to feel like they are up close to the statues in the Kannondo Hall, temple officials said.

The video production was funded by subsidies from the Agency for Cultural Affairs for developing multilingual commentaries for cultural properties in response to large volumes of foreign tourists. In addition to Japanese, there are also explanations available in English, Chinese and Korean.

The images were shot in high definition with a special camera.

The Advanced Imaging Technology Research Center (AITReC) handled the technical aspects of the video production. The center is headed by Ari Ide, a Kyoto University professor emeritus, who is originally from Iran.

Australian high school students, whose school trip to Japan was canceled due to the coronavirus pandemic, got the opportunity in June to experience the VR video tour. The students reacted positively, temple officials said.

"VR imagery is useful not only for young people to learn about Japanese cultural properties but also for people who can't visit the temple due to disabilities or illnesses," Ide said. "We can also promote the charms of tourism in Japan."

The VR tour is open to the public at the temple until July 31.

Reservations are required for each 30-minute session. The sessions are held seven times a day, starting at 10 a.m. It costs 1,300 yen ($12) for adults, 500 yen for senior high school students and is free for junior high school and elementary school students. Grade-schoolers must be accompanied by their guardians.

To make a reservation, visit Ninnaji's website at (http://www.ninnaji.jp/news/vr-reservation-site/) or go to Kyoto Kanko Navi at (https://ja.kyoto.travel/anshin/).