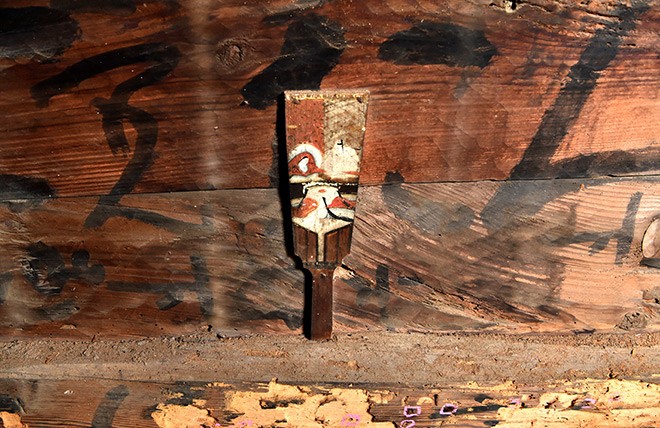 A “hagoita” wooden paddle believed to be more than 400 years old that was discovered at Gankoji temple in Mitake, Gifu Prefecture. The wall the paddle was nailed to bears graffiti written in ink. (Noboru Tomura)

MITAKE, Gifu Prefecture--Knock down a wall and you never know what you’ll find, especially if the building being renovated is an ancient temple.

Two “hagoita” wooden paddles for the traditional badminton-like game “hanetsuki,” believed to be more than 400 years old, were discovered in a recess inside the main hall of Gankoji temple here.

The temple is believed to be the birthplace of Kani Saizo (1554-1613), a legendary master spearman who briefly served warlord Akechi Mitsuhide.

Graffiti, also more than four centuries old, was found scribbled on a wall behind an altar upon which the temple’s principal deity had been placed.

When decorative boards were removed, it became clear that Soma, Shimotsuke and other geographical names, as well as names of people, were found written in ink across the wall.

Toimi Uchiyama, who is in charge of the renovation work, believes that they were scribbled by travelers passing through the Tosando, one of the main routes during feudal times, before the “kuden” (a type of “zushi,” or a miniature shrine containing the temple’s principal deity) was donated in 1610.

“The fact that it contains a lot of graffiti shows that it was a temple familiar to the public,” said Uchiyama, 59, who heads the on-site office of the Japanese Association for Conservation of Architectural Monuments.

The hagoita were nailed to a wall more than 2 meters tall. One paddle was displayed to show its front side, an illustration of an emperor, an empress and three court ladies, now faded with time.

The other paddle bears a severely flaking illustration that appears to be “shitomido,” or latticed wooden shutters, on its reverse side.

When the paddles were removed for an exhibition to show how the temple’s renovation work is being carried out, an illustration of what appear to be two cranes and a pheasant was discovered on the reverse side of the first panel.

Makoto Kuriyamoto, a curator at the Nakasendo Mitake-kan museum where the exhibition is being held, said he believed the paddle bearing the cranes and pheasant was “likely drawn to make a wish,” due to its celebratory motif.

“Judging from the condition of the parts and materials, as well as other circumstances, it is safe to say that the paddles were mounted there before 1610,” Kuriyamoto, 49, said.

Uchiyama said, “It’s possible they were dedicated (to the temple) to wish for children's health.”

The main structures of Gankoji, a temple of the Tendai school of Buddhism, are said to date from 998. The main hall was rebuilt in 1581 after it burned down twice.

The main hall, designated by the government as a national important cultural property in 1986, has been taken apart for the first time for the renovation project that started in November 2017.

The exhibition displaying the paddles runs at the Nakasendo Mitake-kan museum until Aug. 23. Admission is free.