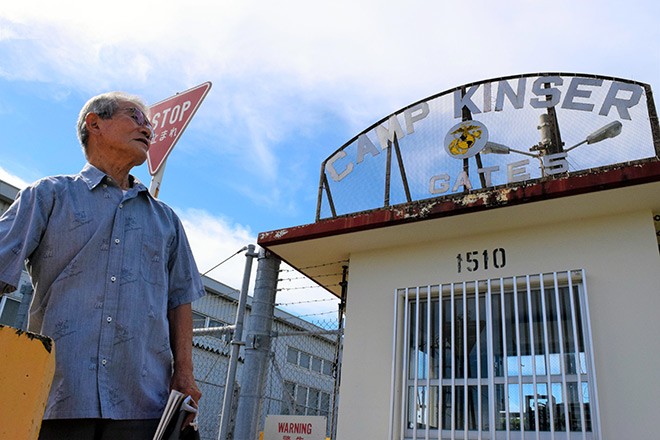 Kiyoshi Higa before U.S. military’s Camp Kinser in Urasoe, Okinawa Prefecture. The area where he lived until he was 5 years old is now part of the U.S. base. (Mika Kuniyoshi)

NAHA--For decades after the ferocious 1945 Battle of Okinawa, Katsuko Yasumoto freely shared her experiences of the carnage, but always held back on one particularly painful detail: atrocities committed by Japanese soldiers against their own countrymen.

Yasumoto, now 81, spent more than 40 years talking about the horrors of war because she wanted young people to take the preciousness of life to heart and realize that those who died in the battle--about 200,000 for both sides--desperately hoped to survive.

Yasumoto suffered a severe abdominal injury when she was hit by a shell fragment while wandering in the mountains of northern Okinawa to flee the fighting.

Her elder sister, who had enlisted as a nursing assistant for the Imperial Japanese Army, was left grossly disfigured after she was burned by a flamethrower brandished by U.S. troops. She died the following year, soon after the sisters were finally reunited after the end of the fighting.

But some tales were too gruesome to talk about publicly--until just a month ago.

By June 1945, Japanese troops deployed to Okinawa had been practically wiped out. But some soldiers, as well as Okinawans, hid out in the mountains in the north. Yasumoto was held in a detention camp after she was captured by a roving U.S. military patrol.

She witnessed barbaric acts committed by Japanese troops at a village where she stayed after she was released from military custody.

During that time, she watched in horror as a Japanese soldier chased an Okinawan man and decapitated him with a sword. The Okinawan spoke English as he had lived in Hawaii as an immigrant.

Yasumoto also witnessed a Japanese soldier stab an elderly man to death for calling out to people taking refuge in a mountain hideout to surrender.

The Japanese army was especially fearful of leaks of damaging information for the Japanese side in a battleground were so much of the civilian population was embroiled in the fighting.

Numerous accounts exist in official records kept by local authorities of islanders killed by Japanese troops who deemed them to be “spies” because they spoke in Okinawan dialect or had formerly been detained by the U.S. military.

It was only after the end of the hostilities that Yasumoto was able to fully grasp the extent of the horrors perpetrated on Okinawans.

She was unable to quell her fears when she passed a site where men’s lives were taken.

Yasumoto, a resident of Naha, was in her 30s when she began sharing her accounts of the battle to students visiting Okinawa from other parts of the country.

But the one topic she could never bear to talk about was the number of Okinawans who lost their lives at the hands of Japanese troops.

“I thought that it must be shocking for children coming from outside the prefecture to learn that Japanese soldiers, who are supposed to protect residents, killed them,” she recalled.

All she could say was: “War turns people into demons.”

In late May, during an interview related to a joint survey being done while she was hospitalized, Yasumoto underwent a change of heart and decided to reveal the horrifying episodes.

Two years previously, she had stopped sharing her wartime experiences due to her deteriorating health.

“I could finally tell something that I had locked away in a corner of my mind,” she said, adding that at long last she felt she had fulfilled her responsibility as a survivor to fully portray what occurred during the battle.

The Battle of Okinawa began late March and was the only ground battle involving civilians fought in Japan. Prefectural records state that one in four Okinawans, or about 120,000, was killed in the hostilities.

The prefectural government holds a memorial service for all of the victims each June 23, the day that organized resistance by Japanese troops ended.

Kiyoshi Higa, an 80-year-old resident of Urasoe, said that just talking about the battle will never be enough to convey the suffering of Okinawa that has continued in the postwar period.

The settlement of Kowan where he grew up until he was 5 is gone: It is now occupied by U.S. military as Camp Kinser.

Those months were unforgettable. But the most unforgettable moment was when he stopped by the Kowan settlement in 1949 following his release from a U.S. detention camp.

As a young boy, Higa remembered the settlement of narrow streets being adorned with pieces of white coral and flowers of the Indian coral tree. But all that was gone. The settlement had been leveled, and there were no reminders of the past.

At the age of about 60, Higa began collecting documents and pictures of the Kowan settlement after holding hearings with former residents to document its history.

What emerged from his research was the immense suffering of Okinawans, who lost not only family members and their homes but also were forced to live in abject poverty, getting by on food left by U.S. troops and working for the U.S. military.

Okinawa is home to about 70 percent of U.S. bases in Japan today.

“The Battle of Okinawa is not a remote event in the past,” Higa said. “I want people to realize that the sprawling U.S. bases were built on the agony of Okinawans.”

The task of passing on wartime experiences to posterity after the passage of decades remains a major challenge, a recent joint survey by The Asahi Shimbun and The Okinawa Times showed.

The ratio of survivors of the Battle of Okinawa who replied that they believe their experiences were not fully or hardly passed on to younger generations stood at 62.5 percent.

The telephone survey was conducted between April and June by contacting about 680 people.

There were 216 responses. All of them lived in Okinawa Prefecture. Their average age was 84.8. Of the 216, 155 had relatives who were killed in the battle.

The share of respondents who said they had recollections they have never shared until today came to 25.9 percent, while 67.1 percent said the opposite.

The survey also showed that 53.2 percent believe their wartime experiences were not conveyed to younger generations sufficiently.

The ratio of those who replied “not at all” stood at 9.3 percent.

These numbers suggest the difficulty of driving home the brutality of war to young people despite survivors’ efforts to share their traumatic experiences.

(This article was compiled from reports by Shohei Okada and Mika Kuniyoshi.)