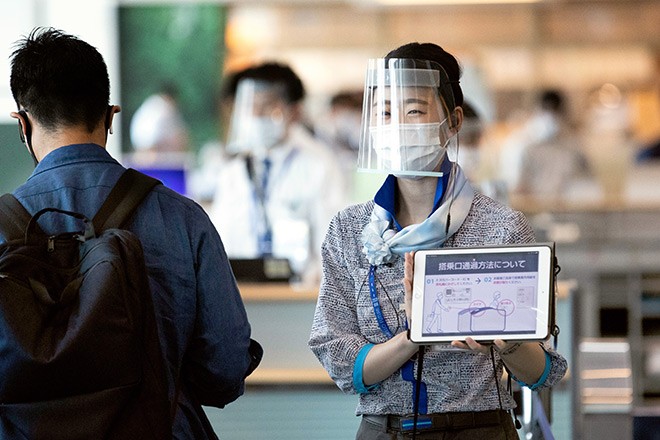 An airport official gives guidance in front of a boarding gate at Tokyo's Haneda Airport on June 4. (Kazuhiro Nagashima)

While demand for domestic flights is slowly picking up again, airlines are implementing various measures aimed at both reassuring and protecting passengers, as they try to woo back customers.

Passengers donning face masks at Tokyo's Haneda Airport on the morning of June 4 passed a sign at the security check entrance that said, “All passengers are required to wear a facial mask.”

Passengers have been returning to the airport since the state of emergency was lifted in May.

But ANA Holding Inc. stated it could refuse boarding to passengers not wearing face masks at airports and during flights from June.

“If wearing facial shields makes customers feel safe, we should do it systematically,” said Hitomi Yoshikawa, an airport official with the ANA group.

Disinfectant solutions were placed in front of the security checkpoint, and passengers were required to have their body temperature checked via infrared cameras. They entered the security check following floor marks placed two meters apart.

After baggage inspection, passengers do not receive their inspection certificates from officers but are required to take them from a ticketing machine by themselves.

Airports are not the only venues changing their habits.

On a flight departing a little before 10 a.m. for Fukuoka, which only just resumed this month, about 60 to 70 percent of the 270 seats were occupied, mainly by business customers.

Flight attendants helped them with their baggage in the overhead compartments, as usual.

But the ubiquitous in-flight magazines are no longer provided at each seat.

Although, passengers can get the magazines if they specifically ask for them, the publications are thrown away after each use.

The in-flight announcement just before departure draws attention to the new anti-infection measures: “Air conditioners in the aircraft recirculate the air every three minutes, using cutting-edge filters. Please wear face masks and be careful when you cough.”

The airline no longer provides beverages in cups. It does, however, offer cartons of green tea for adults and apple juice for children. Flight attendants wearing vinyl gloves offer them from trays.

“When I saw airline staff wearing face shields, I thought that they were very careful, so I felt safe,” said a 31-year-old company manager from Fukuoka who was on the flight.

ANA disinfects its aircraft on international flights after every flight, and domestic flights every night. The airline suspended priority boarding temporarily, except for wheelchair users and families with children 2 years old or younger. It started a new boarding practice on June 19 to let passengers into the aircraft in order, starting with those with window seats at the rear.

Japan Airlines Co. (JAL) has suspended selling seats directly beside other passengers for almost all domestic flights until the end of June. That reduces the number of available seats by about 40 percent for the time being.

The airline is also only allowing small groups of passengers, about 10 to 20 people, into an aircraft at once. It added “infectious diseases or suspected-to-be-infectious diseases” to transport agreements, allowing it to turn away potentially sick passengers. It said that it did so “to let other passengers aboard aircraft feel safe.”

Airlines around the world face challenges in instituting new prevention measures against infectious diseases, the most difficult of which is how to maintain social distancing among passengers while they are inside the relatively narrow and confined space of aircraft. That leads to a dilemma: how can an airline ensure passenger safety while also staying profitable?

The European Center for Disease Prevention and Control, and the European Union Aviation Safety Agency, announced new guidelines for anti-virus measures in aircraft in May.

While not mandatory, some airlines are already keeping passengers apart by using empty seats.

According to an online article by Forbes Magazine, China’s Chang An Airlines Co. is selling passengers the option of having their surrounding seats empty.

A number of European airlines strongly oppose removing seats between passengers because that would leave them with only about two-thirds the usual capacity, reducing profits.

The International Air Transport Association (IATA) also strongly opposes removing seats between passengers. According to its research, many airlines will need to achieve a nearly 80 percent boarding rate in order to be profitable.

The IATA assessed that there is a low infection risk inside aircraft because the air is constantly circulating.

David Powell, an IATA medical adviser, said no one has yet proven that enforcing empty seats between passengers will actually reduce the risk of infection.

The IATA estimates flight fees will increase by up to 54 percent if an empty seats policy becomes mandatory.

“Leaving empty seats can reduce passenger anxiety,” said aviation analyst Kotaro Toriumi. “There are no problems (with that) while the demand for aviation is low, but I doubt whether the measure is financially sustainable.”

He, too, said flight fees could probably have to increase to make up for the drop in sales.

While the airline industry faces those harsh realities, Avioninteriors S.p.A., an Italian company that makes seats for aircraft, said it has developed a product design it calls “Janus Seats.”

The name come from ancient Roman mythology, after a god with two faces famous for looking forward and backward at once.

The middle seat in each row of three faces in the opposite direction, toward the rear of the aircraft.

Each seat is shielded by partitions to prevent droplets from coughing or sneezing from spreading.

The company also came up with the idea of the “Glass Safe” seat, designed to ensure passengers’ faces are surrounded by transparent protective shields.

According to CNN, the company received inquiries from a few companies and started manufacturing prototypes.

(This article was written by Shun Niekawa and Shinya Sugizaki.)