EDITORIAL: Memorial day in Okinawa a time to reflect on the wartime past 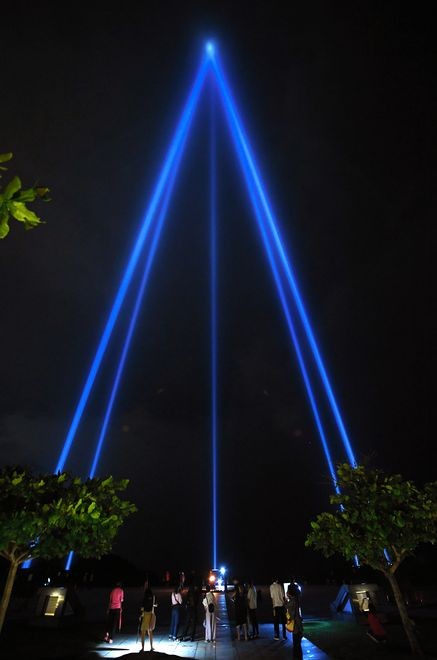 A commemorative searchlight tribute called "Heiwa no Hikari no Hashira" shines through the dark sky at the Peace Memorial Park in Itoman, Okinawa Prefecture, on June 22. (Ryo Kato)

June 23 is Okinawa Memorial Day, when people in the prefecture console the spirits of those who died in the Battle of Okinawa in 1945.

A memorial ceremony is held in Mabuni in the city of Itoman, where the last major battle in Okinawa was fought between Japanese and U.S. forces.

This year's ceremony has been scaled down to prevent infections with the new coronavirus. But the prefectural government’s plan for the ceremony has provoked controversy.

The local administration initially planned to hold the ceremony at the National War Dead Peace Mausoleum within the Peace Memorial Park, where the remains of 180,000 victims are interred, instead of the usual square near the Cornerstone of Peace monument within the same park. Annual Memorial Day ceremonies have traditionally been held near the monument.

But researchers of the Battle of Okinawa opposed the plan to move the venue. They argued that holding the ceremony at a national facility would be at odds with the sentiment of people in Okinawa Prefecture who lost their families in a war launched by the state.

One notable fact about the Battle of Okinawa is the huge number of civilian casualties. Of the more than 200,000 deaths during the three-month battle, local residents accounted for some 94,000. If Japanese military and civilian personnel from the prefecture are counted, one in every four Okinawans died in the battle.

Countless local residents were chased out of the caves they had taken refuge in or pressured into ending their own lives by Imperial Japanese Army troops.

When the government ordered the removal of a description in a school history textbook about how the Japanese military forced local residents into mass suicides, an island-wide protest campaign was staged.

Okinawa Governor Denny Tamaki retracted the venue relocation plan, saying he had failed to understand the implications, and decided to hold the ceremony at the usual site near the monument on which the names of all people who lost their lives in the Battle of Okinawa, regardless of their birthplaces and nationalities, are inscribed.

Occurring 75 years after the end of World War II, the controversy came as a fresh reminder of the fact that the deadly mistakes committed by the Japanese government and military at that time will never be erased while at the same time it is becoming increasingly difficult to hand down memories of the war to future generations.

In a joint interview survey of the Battle of Okinawa survivors conducted by The Asahi Shimbun and The Okinawa Times, a local newspaper, more than 60 percent of the interviewees said their experiences had not been passed on to younger generations.

Many of the people who had first-hand experiences of the war have passed away, and opportunities for young people to hear their stories are dwindling year after year.

Partly alarmed by the situation, a growing number of researchers and local residents are calling for the preservation of the site of the Imperial Japanese Army’s underground command headquarters built directly under Shuri-jo castle in the prefectural capital, which burned down in a fire at the end of October.

The underground headquarters, built by mobilizing numerous local residents as well as troops, had 1 kilometer of passages and spaces. More than 1,000 military officers and local civilian personnel and students lived together within the facility.

In the 1990s, calls arose among local communities for preserving the site and opening it to the public but the movement eventually died down. But this movement has come to life again during discussions to map out a plan to restore the destroyed castle.

In the face of ferocious attacks from the U.S. forces, the Imperial Japanese Army command decided to flee the castle to southern parts of the Okinawa island, areas to which many local residents had been evacuated.

The decision, based on a plan to buy time to delay the U.S. invasion of Japan’s main islands as much as possible, effectively expanded combat areas where civilians became embroiled in battles, thereby increasing the number of victims.

This is a war site that represents the starting point of Okinawa’s postwar history, which has been marked by the excessive burden of hosting U.S. military bases borne by people in the prefecture.

The mayors of Hiroshima and Nagasaki, two cities which also suffered massive civilian casualties in the war, sent messages to the Okinawa Memorial Day ceremony. The day should serve as opportunities for all Japanese to reflect on these tragedies 75 years ago and think about the future of this nation.