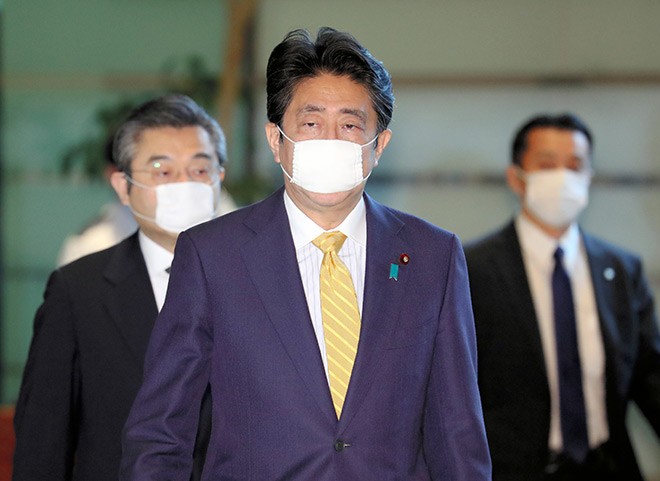 Nearly 70 percent of voters are opposed to Prime Minister Shinzo Abe serving a fourth term as Liberal Democratic Party president through a possible change in the party’s rules, an Asahi Shimbun survey showed.

The weekend poll also found that Shigeru Ishiba, former secretary-general of the LDP, is easily the most popular choice to succeed Abe as chief of the ruling party.

Abe’s current three-year term as the LDP president ends in September 2021. However, there has been talk within the party about extending the current three-term limit.

But opposition to having Abe enter a fourth term was 69 percent in the survey, up 9 percentage points from a survey in February that asked the same question.

Only 19 percent of respondents support a continuation of Abe at the helm of the LDP, down from 25 percent in the February survey.

Opposition to a possible fourth term grew significantly even among LDP supporters. The ratio rose to 54 percent from 43 percent in the previous survey.

In contrast, 36 percent of LDP supporters were in favor of a fourth term for Abe, down from 46 percent.

Among unaffiliated voters, 72 percent oppose a fourth term, an increase of 6 percentage points from the previous poll, while 13 were in favor, down 1 point.

Abe is the longest-serving Japanese prime minister. However, his Cabinet’s support rate has tumbled during the COVID-19 pandemic.

The survey provided a list of potential candidates and asked respondents who should succeed Abe as LDP president.

Ishiba expanded his lead as the frontrunner, gaining support from 31 percent, up from 25 percent.

In second place was Environment Minister Shinjiro Koizumi, son of former Prime Minister Junichiro Koizumi, at 15 percent, up from 14 percent, followed by: Defense Minister Taro Kono at 9 percent, up from 8 percent; Fumio Kishida, chief of the LDP Policy Research Council, at 4 percent, down from 6 percent; Chief Cabinet Secretary Yoshihide Suga at 3 percent, down from 5 percent; Foreign Minister Toshimitsu Motegi at an unchanged 1 percent; and health minister Katsunobu Kato, down slightly to less than 1 percent.

Thirty-one percent of respondents replied that none of the politicians cited in the survey was their choice, compared with 32 percent in the February survey.

Support for Ishiba as party president also expanded among LDP supporters, with 29 percent picking him, up from 22 percent.

However, the other potential candidates could not broaden their support base in a meaningful way, the latest survey showed. Kono is the only one who increased his standing--by 2 points--among LDP supporters. The others saw their support rate drop or remain the same.

Twenty-three percent of LDP supporters answered that all of the politicians named in the survey are not fit to serve as president of the party, down from 26 percent.

By age group, 40 percent of respondents in their 50s and 60s chose Ishiba as their favorite to replace Abe as LDP president.

Koizumi was the most popular choice among voters aged between 18 and 29.

Although Japan’s numbers of COVID-19 infections and deaths are far lower than those of most other countries, more than half, or 51 percent, of respondents disapproved of the government’s handling of the health crisis.

That figure was down from 57 percent in the survey conducted in May. And the ratio of those who approved of the response was 38 percent, up from 30 percent.

The survey showed that Abe’s project to distribute cloth face masks to all households has been overwhelming unpopular.

Eighty-one percent said the so-called Abenomasks were not useful while 15 percent replied the opposite.

The distribution of the washable and reusable cloth masks was announced on April 1 as a solution to the dire shortage of face masks at the time. However, masks had already returned to store shelves before the cloth masks were delivered to many homes.

Sixty-nine percent of those who gave positive marks to the government’s handling of the COVID-19 crisis said the cloth masks were useless.

The survey also found that 53 percent disapproved of the government’s economic measures to ease the suffering of the population during the pandemic, compared with 34 percent who approved the steps.

As for the government’s approach to bolstering the public health care system to prepare for a second wave of infections, 45 percent gave a thumbs down, whereas 37 percent approved the preparations.

The nationwide survey was conducted on June 20 and 21 using landline and mobile phone numbers selected at random by computer.